Simon Cowell was infamous for his anti-marriage stance, but buzz is that he and American Idol makeup artist Mezhgan Hussainy are engaged. While Cowell isn’t commenting, word is, the lady has confirmed the news! 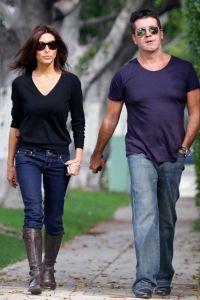 “Simon does not discuss his private life,” was Cowell’s publicist’s response and there have been several reports negating the rumors.

Radar online, however, now reports they got the confirmation from Hussainy, herself.

Cowell, 50, and the gorgeous 33-year-old Afghanistan native met at work about seven years ago. The friendship apparently blossomed into something deeper after things fizzled with Cowell’s ex, Extra correspondent Terri Seymour, back in 2008.

After Cowell brought Hussainy as his date to his big 50th bash, his rep did speak to his personal life, in spite of the recent quote.

“They are very suited,” Max Clifford said. “She is someone who is independent and says what she thinks and feels, and he likes that. He’s probably the happiest I have ever known him in the nine years I’ve been working with him.”

Rumors of the engagement started flying after Hussainy was spotted with a massive diamond on her finger following a Valentine’s Day dinner. Ryan Seacrest even made light of it on American Idol, but confirmations weren’t coming.

In the past, Cowell has spoken out about marriage, calling it an outdated contract. Having made $75 million last year, he’s voiced his fear of losing half of everything to the wrong woman.

Now, while Radar teases that the wedding will be sooner than later, Cowell hasn’t comment directly. In fact, there are even reports he denied it in mid-February.

At the same time, however, he did apparently call her “the one” in a recent interview for British TV.

“I’m smitten with Mezghan. I think she’s the one,” he said. “You know when you’ve found somebody very special.”

He also hinted that kids were in the future, saying, “I think I need to have little Simons around.”

Now that’s an image! SheKnows sends out congratulations to Simon and Mezhgan — if not for the rumored nuptials, then at least for landing a great round of press attention.

Read on for more Simon Cowell