The 18-year-old son of Marie Osmond has committed suicide, the singer’s family has confirmed. 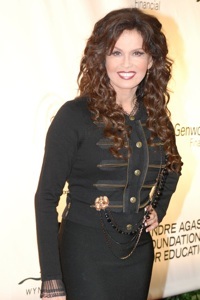 Michael Blosil, one of
Marie’s eight children, died around 9 pm February 26 after jumping from his downtown Los Angeles apartment.

The troubled teen left a note stating his desire to kill himself stemmed from his life-long battle with depression, leaving him feeling as if
he had no friends and could never fit in.

Marie Osmond released the following statement through a rep: “My family and I are devastated and in deep shock by the tragic loss of our dear
Michael and ask that everyone respect our privacy during this difficult time.”

Michael reportedly checked into rehab in 2007, and law enforcement sources say Michael’s roommates told them he was clean around the time of his death.

The friends did confirm, sadly, that the teen had tried to take his own life at least once before and had been struggling emotionally recently.

Marie’s brother Donny Osmond asks, “Please pray for my sister and her family.”

Donny and Marie’s Vegas show has been cancelled indefinitely.

read on for more celebrity deaths