The Office is having a baby with Pam and Jim, welcoming their little one with an hour-long The Office special on March 4. Don’t miss our preview, which includes the cast chiming in about welcoming a baby to The Office.

When Pam goes into labor, she and Jim try to slow down the contractions to spend more time at the hospital, while their coworkers do their best to distract the mommy-to-be from the pain with food and fun. “I talk about the Pam and Jim child as the first true Dunder Mufflin Scranton child,” Steve Carell (Michael) said. “This is an in-house creation, so it’s an awfully special event.” 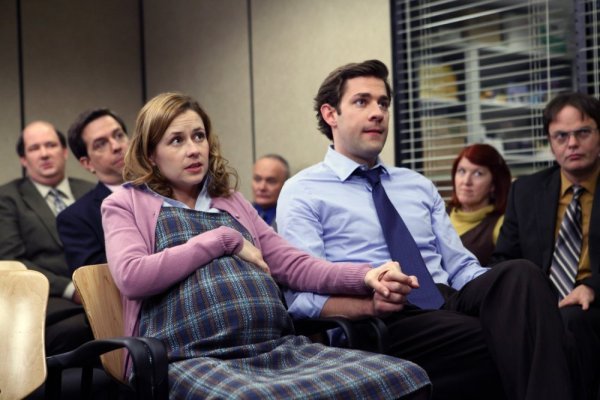 Michael may be the most excited of all and while the rest of the Scranton crew is back at The Office for the second half-hour, he’s on hand, anxiously awaiting the new arrival.

“Michael sort of lives through other people in a lot of ways and I think he’s so happy for Jim and Pam that he wants to feel a part of the experience,” Carell previewed. “Mostly, he wants just to help. He wants to help them not only give birth, but raise this child, so he’s probably going to infuse himself into the proceedings as much as possible.”

It took several seasons for Pam and Jim to find each other, but this year, there’s been much focus on the couple taking things to the next level by getting married and now, having their baby.

“This is years and years of following a relationship on television,” marveled Carell. “A fictional relationship, but one that touched people. I love the way John (Krasinski) and Jenna (Fischer) have played these characters, because they’re so honest and truthful — or not.”

The Office: They’re having a baby…

“There’s something very accessible about these character and the experience they’re going through, having this kid,” he continued. “The writers have done a good job of capturing that. I have two kids, and I really identified with what Pam and Jim are going through in this episode. It resonates with anyone who’s had a kid.”

While Carell has enjoyed the story and The Office still has a host of loyal devotees tuning in and loving it, the water cooler chatter about the show has actually been quite mixed this season. SheKnows has even heard some someone say The Office has jumped the shark.

A very special The Office delivery begins on March 4 at 9 pm, only on NBC.

read on for more the office

Visiting the set of The Office
The Office’s Jenna Fischer engaged
The Office trivia game!

52 mins ago
by Sara Kitnick