Although we haven’t heard much from Conan O’Brien after his ginormous settlement with NBC for bowing out of his contract, he’s breaking his silence and channeling the punchlines through a juggernaut of a website better known as Twitter. 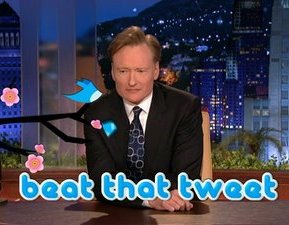 O’Brien tweeted, “Today I interviewed a squirrel in my backyard and then threw to commercial. Somebody help me.” In less than twenty-four hours from joining the social networking site, the late-night comedian already surpassed 235,000 followers.

Although he has time on his hands, he also has money thanks to the $33 million settlement deal by saying the time slot shift of the Tonight Show to 12:05 am would seriously damage the “greatest franchise in the history of broadcasting.”

Conan joked about the legalities in the bio section of his account: “I had a show. Then I had a different show. Now I have a Twitter account.”

Industry insiders are wondering if it’s just a mere coincidence that he created a Twitter account less than a week before Jay Leno will resume hosting the Tonight Show on Monday, March 1 after the Olympics conclude. To date Conan hasn’t made any big announcements regarding the future of his television career, however NBC picked up a series produced by his production company, Conaco.

Like several celebrities on the Twitter bandwagon like Ashton Kutcher, Demi Moore, John Mayer and Taylor Swift, Conan will have a direct way to reach his fans and viewers to keep momentum up in the event he signs on the dotted line with the rumored contract with Fox for the fall.

read on for more on conan o’brien