Kristen Stewart walked into our suite at the Four Seasons Beverly Hills quite casually dressed in a V-neck T-Shirt and jeans — yet she was quite serious about her latest film, The Yellow Handkerchief. The Twilight star, known as Bella to billions, filmed The Yellow Handkerchief in Louisiana in the days after Hurricane Katrina, before the Stephenie Meyer-authored madness began. 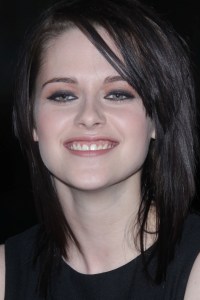 The Yellow
Handkerchief also stars William Hurt and Maria Bello in a romance/road trip movie that also serves as a love letter to the state of Louisiana.

Three characters — Stewart’s Martine, Hurt’s Brett and British actor Eddie Redmayne’s Gordy — head out on a journey
upon which each is running away or seeking to do something redeeming.

SheKnows: Oscar winner Arthur Cohn produced this movie. What did you take away from the Arthur Cohn experience?

Kristen Stewart: He has such a faith in the material. It’s a very old-school sense of, “I’m the producer and I’m going to take care of everybody, and the
most important thing here is the movie and the performances.” And… chocolate! [laughs]

SheKnows: Speaking of guys perhaps not so valiant as Arthur Cohn, the men in your character’s life in The Yellow Handkerchief are hardly model citizens. What
about the character of Gordy made Martine fall in love with him?

Kristen Stewart: She wouldn’t have needed to be won over if she had just opened her eyes and not been so affected by the other guys who had hurt her. I think that she’s
the type of girl who really wants to let her face hang out. Every time she does that or puts herself out there, she gets disappointed by people. The thing that made me see Martine fall for him was
how Brett (Hurt) looks at him. It’s about a girl who is dropping prejudices that she didn’t know she had.

Stewart on working with a stalwart

SheKnows: What was it like for you as a young actor to work with such a professional thespian as William Hurt? 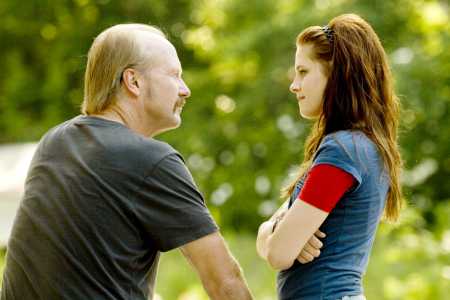 Kristen Stewart: He is absolutely the most attentive, hard-working actor I’ve ever worked with. I say that about a lot of people, but he is. Absolutely. You don’t know
more than him. Regarding a story, he makes you work so much harder to understand the movie. I would not have understood this movie as much as I do [without him]. I would have a completely different
impression, I’m sure.

Up next…Stewart on her Yellow character and what most intimidates her.