It’s been a while since we heard from Brangelina, the duo that is as famous for their on-screen presence as their off-screen romance. Well, in a very publicized smooch during the Super Bowl, the couple continues to create their own buzz and squash rumors that they’re on the brink of breaking up. 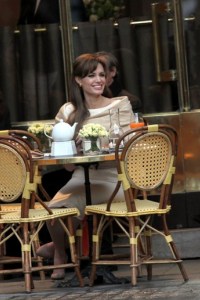 Case
in point: Angelina Jolie’s on set in Paris for her film with Johnny Depp, The Tourist. Despite the fact that the most famous
actress is surrounded by cast, crew, and yes, even the paparazzi, perhaps that was the whole point by sharing a passionate kiss with her man, Brad.

Even with Shiloh and Zahara in sight, there was no stopping the couple from their DPA.

In The Tourist, Angie shares the screen with Johnny Depp. She plays an American tourist used by an Interpol agent in an attempt to flush out a criminal who she previously had an affair
with.

Although she’s currently in Paris, most of the filming takes place in Venice where she and Brad rented a canalside, 15th century palazzo for their family. And although there were widely
publicized rumors about her estrangement with actor dad John Voight, it appears to have been reconciled as he joined Angelina, Brad, and his
six grandchildren for a recent boat trip in Venice’s Grand Canal.

read on for more angelina jolie and brad pitt