Charlie Sheen, star of CBS’s Two and a Half Men has decided to take time off from his hit television show to enter rehab for cocaine and alcohol addictions. 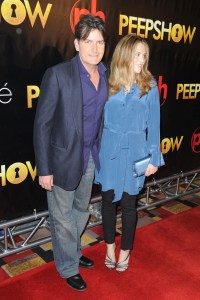 At around 8
pm on February 23, Sheen arrived at his treatment facility which is apparently a separate rehab facility from where his wife, Brooke Mueller, is receiving treatment. Considering both Charlie and Brooke are now in treatment, Charlie’s parents, Martin and Janet, are caring
for their young grandsons at Charlie and Brooke’s home in Los Angeles.

Additionally, Mueller’s mother flew to Los Angeles to visit and help care for the twins.

Sheen’s publicist refers to the stint in rehab as a “preventative measure” as the execs at CBS indicate they’re halting
taping of the hit show while their star actor receives treatments.

The suits issued a statement, “CBS, Warner Bros Television and Chuck Lorre support Charlie Sheen in his decision today to begin voluntary
in-patient care at a treatment center. We wish him nothing but the best as he deals with this personal matter. Production on Two and a Half Men will be temporarily suspended.”

Charlie is the highest paid actor in television so perhaps the rehab will also do damage control for his reputation and highly publicized arrest on Christmas Day after his fight with Brooke.

On the show as many viewers know, his character, Charlie, plays a hedonistic jingle writer who is a Casanova living in a posh beach house as his brother, played by Jon Cryer, and nephew wreak havoc on his bachelor lifestyle.