Sarah Palin’s daughter, Bristol, will make her television debut on the ABC Family drama, The Secret Life of the American Teenager. 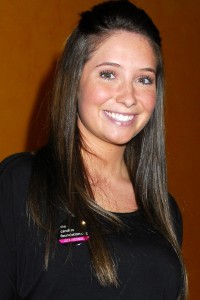 The 19-year-old won’t play an actual character, rather she’ll appear as herself. The episode will shoot and air sometime this
summer as it tackles the consequences of teenage pregnancies.

Since ABC refers to Bristol Palin as the “Most teenage mother in America,” it’s no surprise that she’s been tapped for the role.
She was in the spotlight during the 2008 presidential election.

On September 1, 2008, the opening day of the 2008 Republication National Convention, it was announced that the seventeen year-old was pregnant and planning to marry Levi Johnston, the baby’s papa. On December 27, 2008, Tripp Easton Mitchell Johnston was born.

Although the show which premiered two years ago with its stars Molly Ringwald and Mark Derwin highlights relationships between families and
friends and how they deal with teenage issues, word has not been revealed how the episode will deal with the baby papa, Levi Johnston.

Bristol, who’s named after the town in Connecticut, ended her engagement with Levi last March.

Bristol’s role on The Secret Life of the American Teenager won’t be the first for the teenager in the spotlight. Last May she worked with the National Campaign to Prevent Teen
and Unplanned Pregnancy and the Candie’s Foundation to inform teens about negative consequences of teenage pregnancies.

As the Teen Abstinence Ambassador for the Candie’s Foundation, Bristol gets paid to attend town hall meetings and give interviews on morning talks shows. On television she stated,
“Regardless of what I did personally, abstinence is the only 100-percent foolproof way you can prevent pregnancy.”

Read on for more Palin