Padma Lakshmi has given birth to a baby girl! 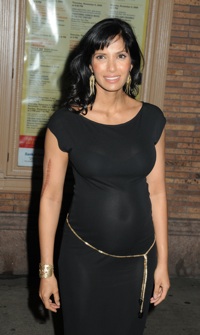 Lakshmi, who has not named the father of the child, gave birth over the weekend.

The girl’s name has been planned for at least a month by the new mother, who told People in January, “I am going to name the child an Indian name. It will be after someone in my family, so
don’t expect to see an Anglicized name — it will be a classically Indian Sanskrit name.”

Padma was once married to controversial best-selling author Salman Rushdie, but the couple divorced in 2007 without having children together. In fact, the 39-year-old model struggled with
endometriosis for years and feared it may leave her childless.

“I’m somebody who never knew I had this condition and always thought that everything was okay,” the Top Chef host said. “I found out in a very hard, difficult way — and I had to be
operated on. Now, I’m fine but it was a very trying ordeal.”

read on for more celebrity baby

It’s a girl for Matthew McConaughey