Tiger Woods said he’s sorry, but did he mean it? The jury is still out on Tiger Woods. 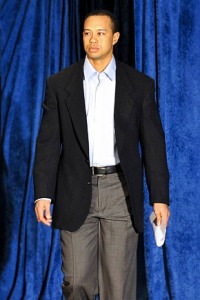 While some felt Tiger’s speech was humble and heartfelt, others thought it sounded stilted, scripted and insincere. “Staged, yes. Awkward, yes. Authentic? Well
that’s the mystery that remains to be seen,” said psychotherapist Jane Shure on HuffingtonPost.com.

Others wondered why it took Tiger so long to speak out. The story broke over Thanksgiving weekend and Tiger’s statement wasn’t made until after Valentine’s Day — and after the media storm had
started to die down. In fact, one golf great calls Tiger’s timing “selfish.”

“It’s selfish,” former US Open and British Open champion Ernie Els told Golfweek. “You can write that. I feel sorry for the sponsor. Mondays are a good day to make statements, not Friday.
This takes a lot away from the golf tournament.”

The tournament in question was the WGC-Accenture Match Play Championship, sponsored by the first company to drop Tiger’s contract.

In contrast, ESPN.com’s Bob Harig thinks for better or worse, Tiger seems to be evolving. “Friday’s effort by Tiger, however much it is analyzed, sought to get him back on track,” Harig wrote.
“Whether you believe it to be brilliant or scripted, heartfelt or arrogant — among the many words used to describe the statement — Woods did
take ownership of the situation by saying ‘I recognize I have brought this on myself.'”

Even Olympian Lindsey Vonn gave her opinion. In describing the post-speech hugs Woods received from friends and family, Vonn said, “They’re like, ‘Yeah, you’re awesome, you go have that
sex.’ “

Noticeably absent from the televised speech was Tiger’s wife Elin, leading many to believe she would not be forgiving her husband any time soon, despite her appearance in full Nike regalia the day
before. However, sources say Elin and the kids have accompanied Tiger to Arizona where a plane registered to his corporation was spotted at a local airport and the golfer is rumored to be heading
back into sex rehab.