Coco Before Chanel Costume Designer Catherine Leterrier was sitting with her best friend in a Paris Italian restaurant when she received news she earned an Oscar nomination. The first to utter the words “congratulations” was someone who knows a few things about Academy Awards, nominee and Avatar star, Sigourney Weaver.

The French native Leterrier was given the impossible task of costuming a fashion icon. For the Frenchwoman, the added pressure of designing for a personal hero added to her excitement, but also fed her fire to get it right. 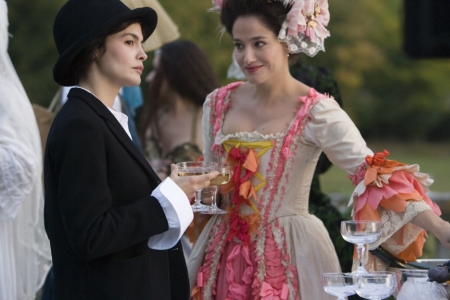 How spot-on did Leterrier get Chanel before she was Chanel? Of the thousands of films released in 2009, her work was named as one of the five best by the Academy Awards. For the costume designer who also crafted the costumes for another French icon biopic, The Messenger: The Story of Joan of Arc starring Milla Jovovich, earning Oscar gold for capturing Coco Chanel would truly be a career highlight.

SheKnows: Where were you when you heard about the Oscar nomination?

Catherine Leterrier: I was sitting in a Paris Italian cafe with my good friend Sigourney Weaver and I got a text.

SheKnows: Wow! So you heard through a text message and the first voice you heard congratulating you was Sigourney Weaver?

Catherine Leterrier: Yes, it was wonderful to have her with me. I am actually Godmother to her little girl.

SheKnows: That’s awesome, particularly because Sigourney’s movie Avatar was so nominated this year.

Catherine Leterrier: I know! I’m so excited to catch up with her at the Academy Awards. We’ll have fun. We always do.

SheKnows: As for the film Coco Before Chanel, I just thought it was brilliant. I’ve seen it three times already. In my review I called it reminiscent of a “master painting.” It is gorgeous and, of course, so much of that were those costumes. Did you have any nerves or apprehension tackling this film because we are talking about Chanel? 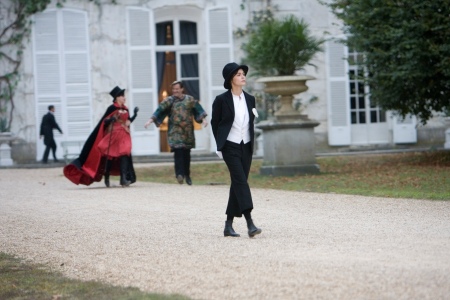 Catherine Leterrier: Yes, I was nervous, but also excited. Most of this story is before Coco becomes the fashion icon. I felt I had the freedom to really invent what she wore, what she liked. I figured she must have sewn most of her own clothes and with what little money she had — what would she create?

SheKnows: And what I loved about what you did in the film is so often times a story will give you hints along the way, but in Coco Before Chanel, the hints came in the form of costuming. When she would see the nuns, you would see these sharp corners, and you would think, “Oh my gosh, that’s where she got it”.

Catherine Leterrier: Yes, you noticed that! That was the other aspect that was fascinating for me about Coco Before Chanel. Where does her timeless vision come from?

SheKnows: How do you as a fashion and costuming artist see Chanel’s impact?

Catherine Leterrier: What was very new about Chanel is that she was like a movie star. Everybody wanted to look like her, the way she moved, the way she behaved, everything. It was all very new. 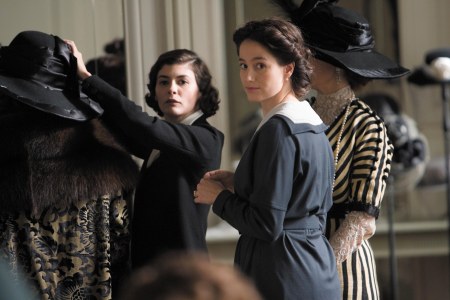 SheKnows: Was putting the costumes together for this film a career moment for you? Because so much of the movie is before Chanel, you almost had an empty slate you could do what you wanted with a fashion icon because she wasn’t an icon yet?

Catherine Leterrier: Yes, she was not even in fashion yet! In our film, she became a milliner. She started as a singer, and then a milliner. She wanted any way to get out of poverty so she was making [money] probably on clothes like any poor women in those days. Since she was brought up by nuns, she would learn how to sew her own clothes and clothes for children, it was how it was done in those days. That’s how it was done in France. Even me, when I was in school, I had sewing classes. Everyone had sewing classes. So she didn’t think of becoming a couturier. She became a couturier because everybody wanted to copy her. It happened just like that. So I was free, because in our film, the Chanel outfit by show nothing is left from this period, I could reinvent what she was probably wearing then by being accurate to the modern fashion in those days. I didn’t have to copy, I just tried to put as many Chanel clothes as I could in that period, thinking that maybe she already had that in her mind.

SheKnows: I can see where you see that. That’s got to be a good challenge!

Catherine Leterrier: She started to use jersey, which was then underwear fabric. She started to use working people outfits, like sailor’s outfits and this kind of thing that she reinvented then. She was wearing men’s outfits, men’s hats, and men’s shoes. In the real pictures of her in those days, there were many pictures of her in those days, she looked very strange compared to the ladies of her day.

SheKnows: Like you say, it’s wild to look at the photos now.

Catherine Leterrier: I saw some pictures, working from that is what I more or less did. One thing that struck me, was she had this white hat. I thought that would be very nice for a movie. She dressed like a kind of tomboy. 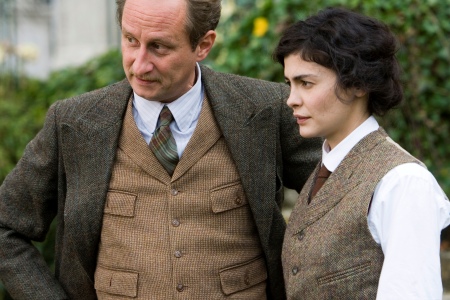 SheKnows: I also love the part where she has to literally convince the women that taking out the feathers of the hat would be better!

Catherine Leterrier: Yes! Less is more, that was a crazy concept.

SheKnows: And not just how foresightful that was, but how revolutionary the idea was. What was it like to costume Audrey Tautou?

Catherine Leterrier: Oh, she was fantastic. She’s magnificent because she’s very feminine, but at the same time she’s very clean. She’s so intense. When we started the fitting, she started to move like Chanel in the pictures, she was looking at herself in the mirror while we were fitting her. She had Chanel checked from the first fitting. She’s lovely. The only thing is that the bras of the first Chanel flattened the breast, Audrey has lovely breasts and is quite big, and Chanel had that piece of lace, so we had to flatten her breasts!

SheKnows: And for you personally, as a French woman, or even as a woman, what do you find inspiring about Chanel’s story?

Catherine Leterrier: She changed the life of women. She freed women. Instead of making them less beautiful, she was the first to allow the body of women to be free without bras, without corsets, and to be beautiful without all the weight. It was complicated to be on the beach dressed like the whale, or even to ride to ride a horse. Women would ride like amazons and were not very free either — with the hats and corsets. Before, it was people who couldn’t afford to have all these things from fashion. I wanted to show that fashion was beautiful, so I made the fashion of the beginning of the century very delicate and beautiful. I just played an opposition that with the way Coco Chanel sewed, it was ridiculous that she couldn’t lead the life she wanted. She wanted to be equal of men. 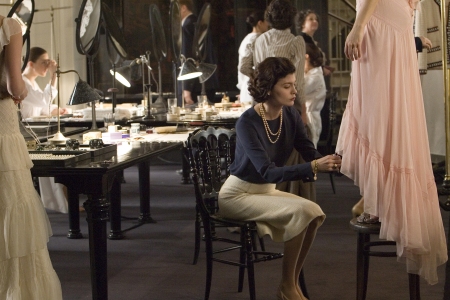 SheKnows: I wanted to ask you, personally, do costumes for a Coco Chanel film, or a Joan of Arc film, are there any other French female icons that you would like to tackle? My goodness!

Catherine Leterrier: I think, because she was very free then to, it would be very interesting to do a film about Brigitte Bardot. In a way, she freed women too, she was an icon then, but she was very shocking. For us in France, it was incredible. The way she was wearing cheap clothes, the check things and all that, but also the way she wanted to have her make up, at least the way the make up looked like it was worn all night long and the messy hair — it was a revolution!

Read on for more Coco Before Chanel