It’s already Day 10 of the 2010 Vancouver Winter Olympic Games and Team USA has not disappointed! Although hockey is not America’s pastime, it certainly is that of Canada’s as the young American hockey squad upset the host country at their own game! 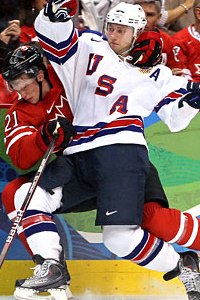 As the American hockey team deflated its rivals with a
score of 5 to 3, the only solace for our neighbors to the north is that it was only a preliminary round.

Not to be overlooked from this weekend was Apolo Ohno’s bronze medal, earned
during the men’s short track 1000. It was a close race. If it weren’t for a slip in a corner, Apolo’s quest would have reached silver or gold contention.

South Korea’s Lee Jung-Su and teammate Lee Ho-Suk earned the gold and silver medals, respectively. This is the seventh medal for Apolo who still has more races left this week.

Although Chad Hedrick had his sights set on gold, he fell to sixth place in the men’s 1500m.

Off the rink and into the slopes, Lindsey Vonn’s illustrious Olympics may seem somewhat tarnished as she “let up on the gas pedal” during the Women’s Super G as Austrian
(and Vonn’s BFF!) Adrea Fischbacher and Slovenia’s Tina Maze skiied right by her, swooping in on the gold and silver medals, respectively.

Take to the SheKnows Message Boards to talk Winter Olympics

Winter Olympics: What to watch

Olympics go on after luger’s death

5 Athletes to watch in Vancouver

Winter Olympics exclusive clip: How Olympian Moms do it!

Meet the Olympics moms and dads