Tenley and Vienna are Jake Pavelka’s final two, but before we learn which one he’s chosen, he has to face the 15 women he turned down on The Bachelor: On the Wings of Love — Women Tell All.

While The Bachelor is anything but new to television, this year brought a slate of new drama, from a contestant’s alleged affair
with a producer to a conflict between love and career. With ABC previewing tonight’s showdown as explosive, we’re sure to hear a rehash on those big topics. 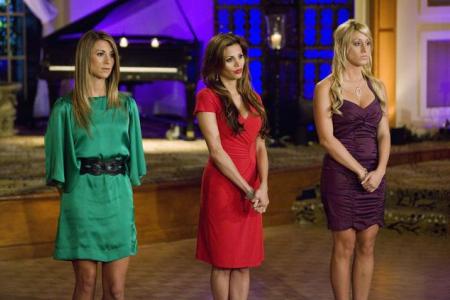 Perhaps the biggest story of the season was Rozlyn, who was sent home for allegedly hooking up with a show producer. She’s denied this scandalous allegation already and tonight she’ll
defend her story again in front of Jake and the ladies, but it sounds like a few of her former housemates have their own version of events to share, as well.

Michelle will get to speak to being booted from The Bachelor after she repeatedly threatened to
leave, while Gia reveals that she regrets not saying the L-word and Elizabeth reconsiders her no-kissing game.

Then there’s Ali, who will defend her decision to leave. Once the front-runner for Jake’s heart, she chose her career over love, bowing out when she heard she might lose her job.
She’ll speak to whether or not she regrets that decision, but from a press conference last week, it sounds like she’s not even sure how to answer that.

“When I saw Jake at The Women Tell All, I felt a lot of regret,” Ali admitted. “It was sad. And then sometimes when I’m sitting at my desk at work, I think, ‘Oh, I love this
job. I made the right choice,’ but it really depends. If I had to choose between love and work again, I might choose love. I think I need to start focusing on that more.”

As to rumblings that Ali may be the next Bachelorette, she demurred, “I’m flattered and I feel great that people think that ABC would consider me for such a wonderful opportunity. I
would definitely have to think about it. I had to make a tough choice, as you all know, last season, to decide to say or leave the show because of work. I have a feeling I’d be faced with that
decision again, if I was offered. So, I would think about it.”

Tune in tonight at 8 pm on ABC to see how it all goes down. Until then, here’s a The Bachelor clip from ABC that was deleted from last week’s show! Perhaps it contains clues!

The Bachelor insight from Jillian
Harris