Anna Wintour and her elite Vogue team of fashion magicians opened their exclusive world for filmmaker RJ Cutler during the publication giant’s exulted industry bible that is The September Issue. 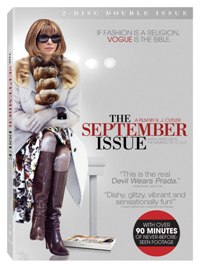 The September
Issue, available on DVD and digital download from Lionsgate as of February 23, is an intimate, funny and surprisingly candid look at an icon at work.

In The War Room, Cutler made media stars of Clinton campaign strategists James Carville and George Stephanopoulos. In The September Issue, Cutler’s stars are a Hall of Fame
list of fashion’s finest.

Cutler’s cameras were granted unprecedented access into the Vogue universe. Passing through the film on numerous occasions are inspiring turns by Oscar De La Renta, Vera Wang
and Jean-Paul Gaultier.

The Wintour wizardry is on full display with The September Issue and SheKnows is proud to present an exclusive premiere of a scene from the gripping documentary.

The September Issue reveals the eye of the annual fashion hurricane in the two-decade relationship between Wintour and Grace Coddington — incomparable creative director and fashion
genius, respectively. Through them, we see close up the delicate creative chemistry it takes to remain at the top of the fashion field.

Anna and Grace take on the runways of Fashion Week, the backrooms of the world’s biggest designers, the high-stakes photo shoots — and each other — as the Vogue team scrambles to find
the perfect look for each page of The September Issue, their biggest

Cutler delivers a riveting look into the world of fashion that is as fun, fabulous and fast-paced as the world it captures.

more about The September Issue