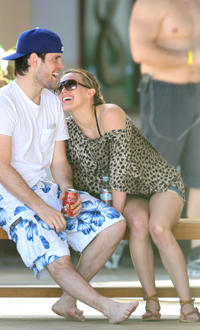 The Edmonton Oilers player popped the
question over Valentine’s weekend while the couple was vacationing in Hawaii.

A rep for the actress confirmed the news. “Hilary Duff and Mike Comrie were engaged this weekend while vacationing in Hawaii,” said Nanci
Ryder.

“After having been together for over two years, they are very excited to share this happy news. They are thankful for all of your warm wishes.”

Duff and Comrie are often seen supporting each other’s careers: Comrie attends many Hollywood events on the arm of Duff, who is often seen rinkside at Oilers games. Also in the stands? Carrie Underwood, whose own fiance Mike Fisher is Comrie’s teammate.

Duff and Comrie have been dating for almost three years, and Comrie proved he has a generous spirit early on when he gave Hilary a Mercedes-Benz G-class SUV worth over $100,000 for her birthday.

The couple has ample time to celebrate — the NHL is on a two-week break for the Olympics. We can’t wait to see Hilary’s ring!

read on for more about celebrities in love