Heading into the 2010 Winter Olympics, the United States boasted a star-studded group of Olympic athletes. So far in Vancouver, the US has not disappointed. As it stands, the United States has six gold medals and 18 total medals — the best of any nation. Here’s a look at the shining stars and what they have accomplished at the Vancouver Olympics so far. 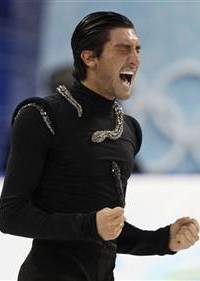 Lindsey Vonn scared her adoring fans when she announced that a severe shin bruise could threaten her availability for these Olympics. Thankfully, Lindsey has overcome her injury and already has a gold medal to her name. She won the women’s downhill in alpine skiing this week — quite easily, we might add!

This 24-year-old American figure skater is now famous around the globe after coming out victorious in men’s figure skating. His gold medal surprised many experts, especially since Russian skaters have dominated the event since 1992. But after his thrilling free skate, there was no doubt Evan was worthy of Olympic gold.

“The Flying Tomato,” also known as “The Animal,” is perhaps the most well-known winter athlete in the United States. The snowboarder showed why in the men’s halfpipe. With his unmistakable red hair flowing in the breeze, Shaun won gold in a memorable performance.

A model of perseverance, Shani Davis didn’t begin the Olympics as planned. The speed skater finished 12th in the 5000 meters event, then finished 18th in the first 500 meter race. Undeterred, Shani entered the 1000 meter event — and won! His time of 1:08.94 was best by less than two-tenths of a second.

Apolo Ohno, the superstar short track speed skater, already has one medal around his neck — a silver in the 1500 meter event. Apolo now has a total of six medals to his name: two gold, two silver and two bronze. With one more medal, he’ll become the most decorated American Winter Games athlete in history.

Controversy has followed Bode Miller for a lot of his career. In 2006, his failures were well documented. Well, guess what? He’s back. In the men’s downhill event, the alpine skier took home a bronze medal this week.

The Olympics Week To Come

The 2010 Winter Olympic Games in Vancouver have only reached the halfway point! There is still plenty of action yet to be seen. This weekend, the ice dancing duo of Tanith Belbin and Ben Agosto look to win gold after taking home silver in 2006. We also get to watch Lindsey Vonn, Shani Davis and Apolo Ohno try to add more medals to their growing collection.

Next week, figure skating takes center stage with American Rachel Flatt aiming for perfection. Be sure to tune in on Thursday when that prestigious gold medal is awarded. Also, we’ll continue to see more of Lindsey and Apolo during the week.

In the final weekend of these Olypmics, a number of events are handing out medals including bobsled, curling, snowboarding and cross-country. However, the most watched event will be the hockey gold medal game, which will take place on Sunday. Later that evening, the Closing Ceremony will put an exclamation point on these Vancouver games.