Tiger Woods apologized for his transgressions and spoke of a return to golf today during his first public statement since the scandal broke. 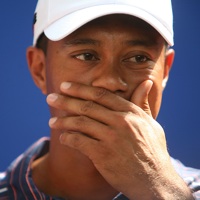 Tiger took to the podium at his local golf course and spoke of marriage, religion, regret and letting down his fans. What we’ve gleaned from his words: He
and Elin are staying together (for now, at least), he’s in sex rehab, and he will be returning to both Buddhism and golf.

Here’s what Tiger had to say today…

I want to say to each of you, simply and directly, I am deeply sorry for my irresponsible and selfish behavior I engaged in. I know people want to find out how I could be so
selfish and so foolish. People want to know how I could have done these things to my wife Elin, and to my children. And while I have
always tried to be a private person, there are some things I want to say.

Elin and I have started the process of discussing the damage caused by my behavior. As Elin pointed out to me, my real apology to her will not come in the form of words. It will come in my
behavior over time. We have a lot to discuss. However, what we say to each other will remain between the two of us.

I am also aware of the pain my behavior has caused to those of you in this room. I have let you down, and I have let down my fans. For many of you, especially my friends, my behavior has
been a personal disappointment.

I know I have bitterly disappointed all of you. I have made you question who I am and how I could have done the things I did. I am embarrassed that i have
put you in this position. For all that I have done, I am so sorry.

I have a lot to atone for. But there’s one issue I really want to discuss. Some people have speculated that Elin somehow hurt or attacked
me on Thanksgiving night. It angers me that people would fabricate a story like that. Elin never hit me that night or any other night. There has never been an episode of domestic violence in
our marriage, ever. Elin has shown enormous grace and poise throughout this ordeal. Elin deserved praise, not blame.

The issue involved here was my repeated irresponsible behavior. I was unfaithful. I had affairs. I cheated. What I did was not acceptable, and I am the only person to
blame. I stopped living by the core values that I was taught to believe in. I knew my actions were wrong, but I convinced myself that normal rules didn’t
apply. I never thought about who I was hurting. Instead, I thought only about myself.

I ran straight through the boundaries that a married couple should live by. I thought I could get away with whatever I wanted to. I felt that I had worked hard my entire
life, and deserved to enjoy all the temptations around me. I felt I was entitled. Thanks to money and fame, I didn’t have to go far to find them.

I was wrong. I was foolish. I don’t get to play by different rules. The same boundaries that apply to everyone apply to me. I brought this shame on myself. I hurt my wife, my kids,
my mother, my wife’s family, my friends, my foundation, and kids all around the world who admired me.

I’ve had a lot of time to think about what I’ve done. My failures have made me look at myself in a way I never wanted to before. It’s now up to me to make amends, and that starts by never
repeating the mistakes I’ve made. It’s up to me to start living a life of integrity.

I once heard, and I believe it’s true, it’s not what you achieve in life that matters, it’s what you overcome. Achievements on the golf course are only part of setting an example.
Character and decency are what really count.

Parents used to point to me as a role model to their kids. I owe all of those parents a special apology. I want to say to them that I am truly sorry.

It’s hard to admit that I need help, but I do. For 45 days, from the end of December to early February, I was in in-patient therapy, receiving guidance for the issues I’m facing. I
have a long way to go, but I’ve taken my first steps in the right direction.

Some people have made up things that never happened. They said that I used performance enhancing drugs. This is completely and utterly false. Some have written things about my family. Despite
the damage that I have done, I still believe that it is right to shield my family from the public spotlight. They did not do these things. I did.

I have always tried to maintain a private space for my wife and children. They have been kept separate from my sponsors, and by my commercial endorsements. When my children were born, we only
released photographs so that the paparazzi could not chase them. However, my behavior doesn’t make it right for the media to follow my two and a half year old daughter to school, and report the
location. They staked out my wife, and they pursued my mom.

Whatever my wrongdoings, for the sake of my family, please leave my wife and kids alone.

Part of following this path, for me, is Buddhism, which my mother taught me at a young age. People probably don’t realize it, but I was raised a Buddhist, and I actively practiced my faith in
childhood, until I drifted away from it in recent years.

Buddhism teaches that a craving for things outside ourselves creates an unhappy and pointless search for security. It teaches me to stop following every impulse and to learn restraint. Obviously,
I lost track of what I was taught.

I do plan to return to golf one day. I just don’t know when that day will be. I don’t rule out that it will be this year. When I do return, I need to make my behavior more
respectful of the game.”

Is Tiger’s statement too little too late to save his public image? Should he have made it sooner? Sounds like the timing wasn’t up to him. According to PGA Tour Commissioner Tom Finchem, timing was
completely dictated by Tiger’s sex rehab.

“This is the time frame that met with his rehab schedule, coming out for a little bit, being with his family a little bit, it just worked,” Finchem told Good Morning America. “He needs to say how
he feels about things, and how he’s doing with what he set out to do.”

Tiger’s wife Elin did not appear at the conference.