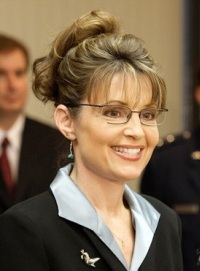 As mother to a son with Down Syndrome,
Palin was quick to take offense over two recent events, and with reason. First, Chief of Staff Rahm Emanuel raged against an idea posed by a
group of liberals by calling them “[expletive] retards.”

Palin took to Facebook February 1, posting a note entitled “Are You Capable of Decency, Rahm Emanuel?” that called for the Chief of Staff’s removal from office and compared his
outburst to using the “N-word”

Then, on Sunday night’s episode of the Fox animated comedy Family Guy, a character with Down Syndrome said, “My dad’s an accountant, and my mom is the former governor of
Alaska.”

The former governor-turned Fox news correspondent didn’t miss the reference. She called the episode a “kick in the gut” on Facebook and snidely referred to the entertainment arm of the network she
works for as “Fox Hollywood.”

Instead of responding fully, however, Palin left it to her daughter to expand and Bristol didn’t hold back.

“If the writers of a particularly pathetic cartoon show thought they were being clever in mocking my brother and my family yesterday, they failed,” Bristol wrote on her mom’s
facebook page. “All they proved is that they’re heartless jerks.”

Family Guy creator Seth MacFarlane released a statement, saying, “From its inception, Family Guy has used biting satire as the foundation of its humor. The show is an
equal-opportunity offender.”

On Tuesday, Palin spoke to these events on The O’Reilly Factor, slamming both Emanuel and the cartoon.

“This world is full of cruel, cold hearted people who would do such a thing,” she said in reference to The Family Guy. “When is enough, enough? When are we going to be willing to say, you
know, some things just aren’t funny?”

As for Rahm Emanuel, she said, “I don’t think he should be part of our president’s inner circle making decisions that affect every single one of us…I thought that that was very
insensitive.”

The double standard here is that Palin isn’t holding her conservative colleague Rush Limbaugh to the same standard of behavior.

After Rahm’s meeting, Limbaugh railed about it on his own show, saying, “Our political correct society is acting like some giant insult’s taken place by calling a bunch of people
who are retards, retards.” He then went on to call Rahm’s meeting with advocates for the mentally handicapped a “retard summit at the White House.”

According to The Plum Line, Palin took a softer line with Limbaugh, but did release her displeasure through her spokesperson. “Governor Palin believes crude and demeaning name
calling at the expense of others is disrespectful,” was the official statement.

Not only was that soft compared to her other comments, but she later denied the release of this statement all together.

On Tuesday, O’Reilly asked Palin to speak to her position and she clearly gave Limbaugh a pass.

“He was using satire using the R-word so he can bring to light what it was that Rahm Emanuel was calling other people,” she said on the show.

SheKnows doesn’t really see the difference. In both cases, the word was used as a derogatory statement for someone lacking intelligence or forethought. What’s bad for the goose is bad
for the gander.

Leave a comment below and let us know what you think.

read on for more sarah palin