American Idol has its Top 24 in place and ready to fight to the finish. Now, season 9 of the talent show is only getting hotter. Fan favorites scooted into the semifinals including Andrew Garcia, Crystal Bowersox, Katie Stevens, Ashley Rodriguez and Haeley Vaughn.

Kara DioGuardi told drummer Tyler Grady, “I think we wanna see those moves again.” After all, his Roger Daltry-inspired stage theatrics did not disappoint! 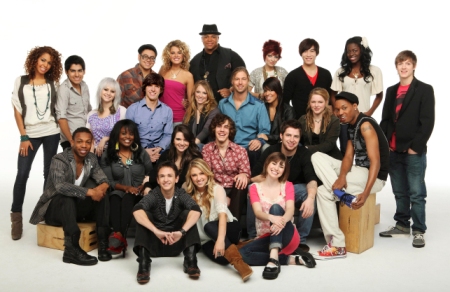 Right after Ashley Rodriguez got the go-ahead, the ukulele king Alex Lambert followed, then came Joe Munoz and Paige Miles. Next up? Eighties rocker Siobhan Magnus and another underdog, Michelle Delamor. She sang the unforgettable Irreplaceable made famous by Beyonce. Next up? The dreadlocked rocker Bowersox cruised into the Top 24 after his spot on singing. She told Simon, “I want this so bad.” In fact, Randy Jackson called her “Mama Sox” after she showed judges a photo of her son. “I feel like I can surprise all of you…” She told them. “I’m very glad I came.”

Not to be outdone is the 17-year-old Katie Stevens whose performances are in honor of her elderly grandmother. She took on Stevie Wonder’s song, For Once in My Life and did not disappoint! Judge Ellen DeGeneres faked her out as she teased about hate having to give bad news and then of course she was moved forward. In a surprising move, Simon asked her about her ailing grandmother as she exited off stage.

Even younger, 16-year-old Haeley Vaughn catapulted into the Top 24 as she continues her quest to be the first black pop country mainstream songstress. Her bid ahead meant a final adieu to Tori Kelly. Jermaine Sellers and John Park also moved ahead which will not disappoint his fans, the Park Rangers.