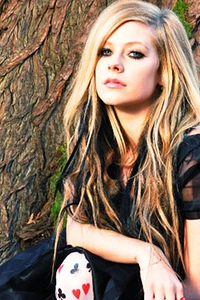 “Follow me down the rabbit hole…my new Alice video is coming soon,” Avril previewed on her website, and now we’ve got the goods here!

Inspired by Tim Burton’s upcoming Alice in Wonderland remake, the new music video features Avril as a crooning, gothed up Alice who tickles the ivory and runs through a magical forest.

Her adventure puts her across the table from Johnny Depp’s wild Mad Hatter and shows her glimpses of characters from upcoming movie, including Alice (Mia Wasikowskia), The Red Queen (Helena Bonham Carter) and The White Queen (Anne Hathaway).

This marks the first release from Almost Alice, which is a companion soundtrack to the official Danny Elfman soundtrack.

This means the songs aren’t in the movie, but were instead inspired by them. Almost Alice hits stands March 2 and includes 15 tracks from the likes of Mark Hoppus (Blink 182) with Pete Wentz (Fall Out Boy), Robert Smith (The Cure), The All-American Rejects, Plain White T’s and Franz Ferdinand.

Tim Burton’s much anticipated adaptation of Alice in Wonderland is set to hit theaters later that same week, on March 5. The new movie catches up with Alice to find her as a 17-year-old who runs from a marriage proposal and lands back in Wonderland, a place she doesn’t remember, even if audiences do.

Read on for more on Alice in wonderland