Olympian figure skater Johnny Weir has turned heads not only after his terrific performance in the men’s skating short program, but for his persona off the ice as well.

At first PETA protestors had issues with his fur costumes and next up, he landed a Sundance series, Be Good Johnny Weir which premiered last month. 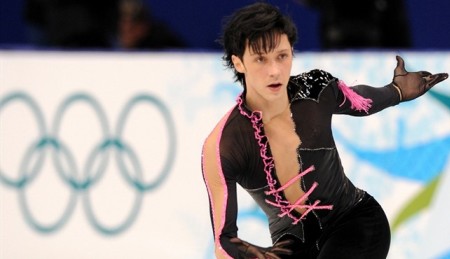 The show focuses on Johnny’s extrovert personality and his ability to be candid, check that – extremely candid. As he wears sparkly “onesie” costumes, the 24 year-old Fashion-Ice-Ta is gearing up for a medal in the long-term program. Having finished in fifth place in the 2006 Torino Winter Olympic Games, he is hoping this time around in Vancouver he’ll go home with some bling.

After the competitions, it sounds like he has a long-term plan for his post-ice skating career. The outspoken ice skater who showed up for a media interview with a red and white silk scarf around his neck and with manicured nails is ready to write a ready to tell all book.

He recently said he’s ready to write an autobiography when all is said and done with his skating career. “I have so many stories,” he said.

“I’ve got so much dirt that I need to get out of me, and so many dealings behind the scenes in this sport, and how cutthroat it really is, and I’m excited to share all of that — while telling my own story and how I’ve intertwined myself through all of it and snaked through relatively unscathed compared to some people. It’s such a small world that I compete in and that I live in, and sometimes it’s ridiculous, sometimes everyone hates you, sometimes everyone loves you. But in general, we all have one thing in common and it’s figure skating, and we all love it, for the most part, and it makes us some sick, twisted family and I want to tell that story.”