As if the shake ups recently at NBC weren’t enough in the press between Conan O’Brien and Jay Leno’s shows, the Tonight Show bandleader is calling it quits. 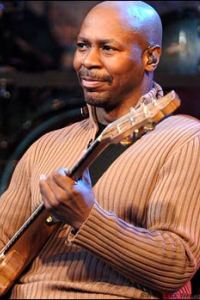 The Tonight Show’s longtime
bandleader, Kevin Eubanks, has decided to leave the show and announcer John Melendez will not be the voiceover for the show either.

When the Tonight Show debuts again on March 1, Kevin will appear mainly because he is currently in talks with NBC about his exit
date.

The Tonight Show insiders estimate that he’ll leave within a few months of when the show airs.

It’s hard to believe how time flies: Kevin joined the show 18-years ago and earned the top spot of bandleader when Branford Marsalis departed the show in 1995.

Kevin, along with Jay Leno of course, were on the Jay Leno Show until its recent cancellation.

Although Jay had big shoes to fill when he took over the show and replaced Johnny Carson, Kevin, too had a tough role as he replaced Branford who previously replaced the colorful Doc Severinsen.
Doc was frequently asked by Johnny to play his trumpet and play solo, he was no slouch for air time and pleasing the viewers.

Speculation has already begun as to who will replace Kevin and if Jay will opt for a showman or woman or someone who’s a relative unknown to give them a big break. Considering Howard Stern is being considered for a judge on American Idol, nothing could be surprising in television in terms of who the next bandleader will be.

In addition, the voiceover like Ed McMahon hasn’t been announced yet either. Although John’s voiceover gig will soon belong to someone else, sources are saying that he’ll continue
with his role as a writer on The Tonight Show.

read on for more tonight show