Jon Gosselin and TLC have reached a legal settlement. That means Jon, Kate and their famous eight children could return to television, but not in a remake of the famed show Jon and Kate Plus 8. 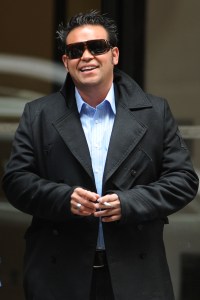 Jon and Kate Gosselin’s divorce was all the news last fall, with endless tabloid cover stories and new updates online almost every day. The ugly
breakup ultimately pushed the family off air and landed Jon in court with the network.

When the divorce was first announced, TLC was planning to create a new Jon and Kate Plus 8 spinoff called Kate Plus 8. Instead, Jon stopped production by refusing to let the kids be taped, and the network filed suit.

The October filing claimed Jon breached the confidentiality and financial terms of his contract with TLC by making public appearances without the network’s clearance.

Gosselin, who was running around with now ex-girlfriend Hailey Glassman, fired
back his own $5 million claim, claiming TLC destroyed his reputation and further injured his career by thwarting his attempts to work with other media outlets.

Jon’s suit also included complaints about TLC’s alleged abuse of child labor laws and about owed back pay of $175,000. TLC and Jon were set to go to jury trial in April, but now, the legal
drama is all over.

“TLC has reached a settlement with Jon Gosselin and will be undertaking procedural steps to conclude the litigation,” TLC said in a statement
Wednesday. “All terms of the settlement are confidential. The whole Gosselin family remains under contract with TLC.”

While Kate was already rumored to have a new TLC show in the works, this means that Jon and the kids also can return to TLC. The network isn’t talking plans, but it doesn’t sound like we’ll see the
return of Jon and Kate Plus 8.

Whatever is in the works, Jon clearly has high hopes.

“Sometimes litigants who kiss and make up find their relationship is better the second time around,” his attorney, Mark Heller, said in a statement. “As Jon’s attorney, I truly hope that this new
adventure for TLC and the Gosselins is a much more joyful journey.”

Read on for more Jon Gosselin