Mo’Nique apparently was the last person expected to conquer a role as she did in Precious. Surprises are brilliant. To say, “Oscar nominee Mo’Nique” is a distinct honor for those who have appreciated the comedienne’s tour de force that is Precious’ most maniacal character. Here, we interview her about the role. 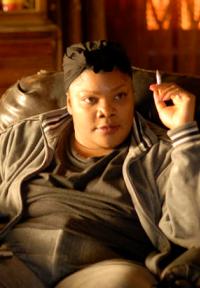 SheKnows: How does an actress wrap her head around Mary in Precious?

Mo’Nique: Insanity. That’s the best way that I can describe her mental illness. She has it. Unwilling to love herself, Mary is what many people consider a monster.

SheKnows: For you, was it beyond difficult to comprehend how a mother could allow this to happen to her daughter?

Mo’Nique: Why does Mary allow her daughter to be abused? I’m not sure how to answer that question. When you ask people who have allowed their children to be abused, you never really get a clear answer because it’s something that, when you look up years later, you think, “What did I do?” But, when you’re in it, most people don’t look at it as being abusive. While Mary is in it, while she is doing the things she’s doing, I really don’t think she feels it’s abusive. She feels it’s the way it’s been.

SheKnows: Were there ever times filming Precious when you said, “Enough is enough?”

Mo’Nique: There are some scenes in this movie that I had to walk away from. Like, that’s… too much. That’s too much. When [director Lee Daniels] said “cut,” I needed him to pull me up out of the mirror. I needed to come up out of her right then because she’s really mean and she’s evil and she’s cruel, but at the same time, you almost feel sorry for her. Because you have to ask yourself the question, “What’s happened in her life to make her turn out like this? What did her mother and father do to her? Who did this horrible thing to her that her heart has hardened?”

SheKnows: You must be so thrilled for Gabourey Sidibe and her Oscar nomination.

Mo’Nique: She… is… incredible. She is an Academy Award-winning actress. That’s what she is. I don’t know any actor who would have given that type of performance. She is incredible.

SheKnows: Fellow Oscar nominee for Best Director, Lee Daniels, had to be priceless on the set for a film such as Precious.

Mo’Nique: Lee Daniels as a director is absolutely brilliant — because he’s not afraid to say, “This is my vision.” You know, often in Hollywood with studios, everyone gets scared of the “no’s” and they get nervous and start rearranging their visions. Not Lee Daniels, it is what it is and, “Action!”

Oscar nominees react
Oscars 2010: Who was snubbed?
Vera Farmiga dishes Up in the Air