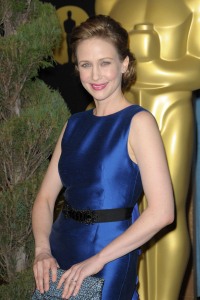 Farmiga is glowing when she describes going Up in the Air with George Clooney and how the Oscar nomination and all it entails has altered life for Vera Farmiga.

SheKnows: How are things today, Vera?

SheKnows: Given this is a film about traveling, any traveling tips as you cross the globe and bask in the glow of award season’s love of Up in the Air?

Vera Farmiga: Shoes, great shows. And I’m the person you don’t want to get behind because I have the full baby regalia. My husband can break it down, he’s getting better at it in at almost 30 seconds.

SheKnows: Portraying the woman you were charged with, what unique aspects of womanhood did you seek to inject into Alex?

Vera Farmiga: In the words who is in the same category as me, Mo’Nique, she said it best at the screen actor’s guild awards, she said, “Just be it. Don’t judge it and leave it on the floor.” I had to do that with Alex as well. When women are portrayed in such a masculine, sexual way they are floozies. The trick was to do it with dignity and to not judge lawyer before the grand jury of the audience. Just to support her and not judge her.

SheKnows: Your rise to Oscar nominee has been a steady stream of solid performances in films that matter. Will the Oscar nomination alter anything in how you choose your next film?

Vera Farmiga: The last five years, since Down to the Bone, have been tremendous to me. I’ve seen incredible material. To work with Madonna and to portray Walla Simpson is an epic love story of a woman who fell in love with a man who happened to be the King of England who wasn’t approved by the royalty, so therefore he abdicated the throne. To see how that happened, I’m fascinated with her and I’m hoping we’ll be able to get that financed and on its’ way. But, I think that’s there’s no — I’ve seen a load of great scripts because it’s all about financing. There are very few films that are between $5 million and $500 million that are being green lit. The energy that has come with the nomination will put those into effect. They’re really great stories and I’d like to see them told.

SheKnows: Walking into the Kodak Theatre, the night of the Oscars, what is going through your head?

Vera Farmiga: I have a toddler who’s running around wanting to grab everything and wanting to hug and kiss and for me, it’s just feeling grounded and feeling present. I’ve been watching this for 15 years from my living room and I’m trying to be in my shoes and feel my feet on the floor. That’s what I’m trying to do.