Sandra Bullock came to lunch wearing Vivian Westwood. “It makes me feel like myself. I feel like a very cleaned up version compared to how I looked when I got up this morning,” Bullock said and exulted that trademark laugh America adores. 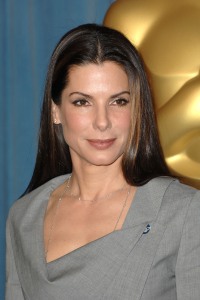 Bullock has been on a wave unlike her phenomenally successful career has seen with her turn portraying the real-life Leigh Ann Tuohy in The Blind Side.

The Blind Side actress, whose Best Actress nomination she admits was a surprise. Given the fact she has dominated the awards season, it would be easy to laugh at her Oscar shock. But, given the Academy’s history of ignoring every other award for certain performances or beloved films, it is easy to see how Bullock was cautious.

“I know I work really hard. But just because I work really hard doesn’t mean the elements come together. I’m always shocked and so happy, and it’s always unexpected to me I expect to fail. That’s why I work even harder. Does anybody expect a nomination? I certainly didn’t. Certain ones (other award nominations) happened and then I’d think that this would be when the backlash happens. This is when it gets ugly. You think this has been nice and I had a nice ride,” Bullock said.

Many of those buzzed about for an Oscar nomination set their Pacific Coast alarms for 4 am on that fateful day when the nominations are announced. What was Bullock doing?

“I was literally asleep when the phone rang. I don’t think expects it, but if they do, how great must that feel when the get it. I just didn’t want to be one of those people who, when it didn’t’ come, be all of sudden crushed where I set everything up for this moment. Please don’t let me be happy with what I have. I am very….amazed and thankful to be here — because I’d like to work hard for another ten or fifteen years. This is what that means. Bring it!”

When I spoke to the newly anointed Oscar nominee exclusively with our video interview, Bullock was adamant that she made The Blind Side because it touched her. Given that fact and also that her instincts have been largely spot-on over her career and that The Blind Side is a huge hit, does Sandra Bullock have a daily mantra?

“I don’t really have a mantra. I’ve learned to just go with the flow. I was very much a control freak where every minute of my life was planned out — every minute. Nothing ever went according to plan,” Bullock said. Upon a second of refection, Bullock remembered a piece of gold. “I also had a little post it on the side of my bed for many years that said: Expect as good as you give. That’s been really good because you don’t realize you don’t do it until you realize that’s what you’ve done with half your life. If you really expect as good as you give, you really step up your game or expect others to match your level.”

Now that she is an Oscar nominee, Bullock’s what’s next is actually set at nothing. She is soaking in the accolades, will take a step back and come back as strong as this honor deserves.

“I think it’s what do I do now? I think I was in that place before this came. It happened to me several years ago when I thought: What do I do now so I don’t step backwards. I’ve been thinking a lot about that. What do I do next? I don’t know what could possibly compare to this moment or this energy. So, I decided to not look at work until this is over so I can make a real judgment. Judge as I always have which is produce some interesting films — I don’t’ want to stop that. There are some things I’d still like to do, but now I feel like because of this honor and what I’ve been given these last couple months I really have an obligation to not step back, even the smallest bit. I really feel an obligation to say no and to keep expecting as good as you give.”

Speaking of giving, Bullock has found a way to continually give back to the world that has afforded her the life of her dreams. “I don’t care about money. But look, I’ve been blessed with crazy money. But a lot of times it was attached to films that weren’t great. Then, I decided several years ago to start from scratch which was working for scale pay. That was on a little film called Crash. I feel now, that if the film is successful I’ll take it on the back end. You don’t have to pay if it doesn’t work. To me, that makes more sense,” Bullock said.

“I can say that, having made pretty good money. But, that pretty good money allows me to do things like help people who don’t have it. To contribute in a way I never could have — to change and help people. As long as I’m happy, that’s what matters to me. I don’t know what that is, day to day, but as long as I figure that out.”

Lastly, the most important question — What are you wearing?

“I’m so behind on this, I just today, saw one dress. I might choose it. I’m pretty good and when I see something, I circle around it. I’m oddly relaxed about it. It’s somebody else’s job to stitch jewels into a gorgeous gown, so if I have to wear a trash bag, I’ll belt it with rhinestones and make it work,” she said and laughed. “I’m not panicking for some reason. Someone will not want to wear something and I’ll get it. There’s something I saw that is exquisite that is just a work of art.”