Nicole Richie and Joel Madden are officially engaged! The 28-year-old starlet informed David Letterman during a taping to air February 19 that the father of her two children and her will indeed tie the knot. 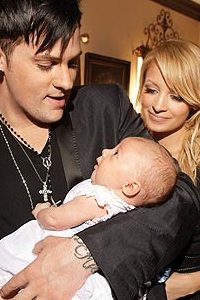 As for when it will happen we’re not exactly sure this summer but the couple has been together for three years and will consummate their love and commitment with wedding vows. Richie and Good Charlotte front man spent Valentine’s Day weekend in Manhattan and dined at the famous Abe & Arthur’s in the trendy Meatpacking District.

Richie appeared on Letterman in a black dress with killer heels and showed off her new bling, though apparently they’ve been engaged for a while. Joel wrote on his Twitter page, “Yep, I’m engaged. Very happy.”

And Madden added, “Yeah, we’ve been engaged for a while so you’re all kinda late on that. But thanks for the hoopla all the same.”

Their two-year-old daughter, Harlow Winter Kate Madden and son Sparrow James Midnight Madden, 5 months, will no doubt be in the wedding ceremony as we’re assuming Lionel Richie will give his daughter away.

Read on for more Nicole Richie