The Oscar nominees gathered for lunch at the Beverly Hills Hilton as a majority of the acting nominees and all five nominated directors stopped by to discuss what it means to be nominated for an Academy Award. 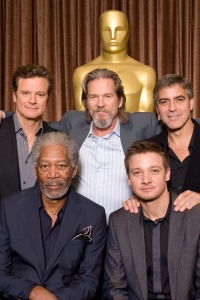 First up to the podium to greet the small gathering of press was An Education star and nominee for Best Actress, Carrie Mulligan.

Mulligan dazzled in black and mirrored the golden Oscar statues behind her with her blond locks. “They sort of match my hair,” the Oscar nominee said.

If Mulligan seems dazed, one can easily understand. The Oscar nominee luncheon is an annual gathering put on by the Academy that spotlights the achievement of all the nominees. How’s the event been thus far for Mulligan? For one, she has already crossed paths with Meryl Streep and Sandra Bullock and lunch hasn’t started.

Jeff Bridges took the stage and if he seemed at ease while simultaneously gracious, that is because he is treasuring this fifth Oscar nomination for Crazy Heart after decades of fabulous work. Although a film veteran, Bridges was ill-prepared for the lavish extravaganza that is the Academy Awards nominees’ luncheon. 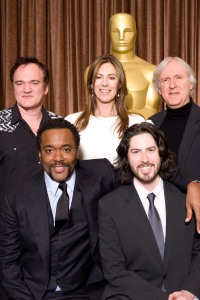 The belle of the ball in this reporter’s mind was an inspiring creative force to witness in person — Best Director and Best Picture nominee Kathryn Bigelow.

Bigelow’s greatest joy in the success of her The Hurt Locker is the awareness it has raised about the very real war killing American soldiers every day.

“I think the film tends to put a magnifying lens on a very difficult situation. Especially now, the film could not be more timely. I think the geo-political really put a spotlight on this particular film. It’s offered a glimpse into a conflict that has been otherwise very abstract,” Bigelow said. “I think it’s touched a nerve.”

2010 Oscar predictions
Oscar nominees react to the good news
Oscars 2010: Who was snubbed?