Related story Want to Get a Head-Start on Valentine’s Day Prep? Pick Up These Delicious Treats from Target

The big winner this weekend was the box office, itself. With all the date nights and family outings, viewers broke a Presidents Day weekend record, spending $10 million more than last year. 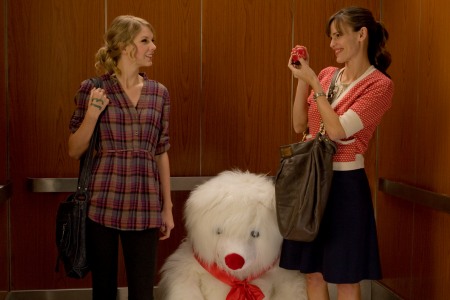 At the top of the list is Valentine’s Day. With a superstar cast of 19 big names, the romantic comedy had a healthy lead, bringing in
$52.4 million. The much-hyped winner is no critical darling, however, and with the romantic holiday behind us, many suspect word of mouth will leave the movie clobbered next week.

Family flick Percy Jackson & The Olympians: The Lightning Thief came in second, with $31.1 million, barely keeping the The Wolfman at bay. The dark drama came in a close
third, with $30.6. With a budget of $150 million to recoup, Universal is hoping Benicio Del Toro will be a stronger draw on the international circuit.

Avatar drops to fourth, but is still holding its own. The record-breaker brought in $22 million this weekend, which is about what it earned last weekend, for a total of $659.6 million to
date.

Last weeks’ big winner, Dear John, didn’t hold up as well. In it’s second week in theaters, it fell all the way down to the bottom of the top five, with $15.3 million.

Crazy Heart continues to see an increase in business, thanks to all the buzz created by awards season. While it dropped to the ninth slot, it brought in $4 million, which is a 18 percent
increase over last weekend.

Interestingly, New Moon also boasted a major jump, with 102 percent increase, although not making the box office top 10. All the
single ladies were out for a date with Edward and Jacob.

None of bottom five made the double digits, with Tooth Fairy dropping to sixth with $5.6 million; From Paris With Love at seventh with $4.7 million, Edge of Darkness at
eighth with $4.6 million and When in Rome at tenth with $3.4 million.

The guys of Valentine’s Day dish

Inside Percy Jackson and The Olympians: The Lightning Thief

At the Avatar premiere

Julie Andrews gives us the Tooth

Kristen Bell’s When in Rome adventure