Lacey Chabert celebrates Valentine’s Day in an elevator. Chabert’s character in Elevator Girl, airing on the Hallmark Channel February 13 at 8 pm, finds her true love in the titular transportation device. The Mean Girls and Party of Five phoned SheKnows Entertainment to discuss her latest film, but also to add insight into how the actress managed to avoid the perils of child stardom to emerge a successful, scandal-free adult actress. 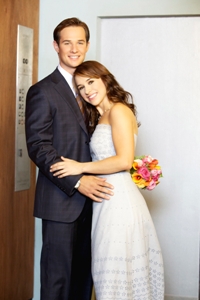 Chabert eventually escapes the elevator prison only to discover she’s working an event honoring Merriman as a server. Sparks fly, romantic
and otherwise. Expect anything less from the child star that mastered the melodramatic mastery of Party of Five and Mean
Girls? Hardly!

SheKnows: Hey! How are you?

Lacey Chabert: I’m good, how are you doing?

SheKnows: I’m doing fantastic. How am I finding you on this fine day?

Lacey Chabert: I’m trying to clean up my place a little bit and I’m getting ready to go on an audition — all that exciting stuff (laughs).

SheKnows: That does sound exciting. Do you still get nerves before auditions?

Lacey Chabert: You know what’s funny? I really do. It’s kind of an exciting nervous. It’s not a panicking nervous. I put my heart and soul in to all of these
auditions. My goal is leaving the room knowing I did exactly what I wanted to do. There’s nothing worse than getting in you car and going, “That’s what I wanted to do.”
Sometimes, I just want to tell them, could you watch me in my car. I’m really good in my car!

SheKnows: Exactly. I’m sure singers feel that way on auditions like many of those American Idol contestants. “Could you just listen to me in the shower?”

Lacey Chabert: (Laughing) You know, I love what I do so I get excited about every job like it’s the first one. But, you are putting yourself out there and it’s
a very vulnerable thing. They’re either going to love it or hate it. At the end of the day, you have to just let it go.

SheKnows: …and just be true to yourself.

Lacey Chabert: That’s right! Be true to yourself and go with your instincts and if it’s not you’re thing, there’s not much you can do about it. 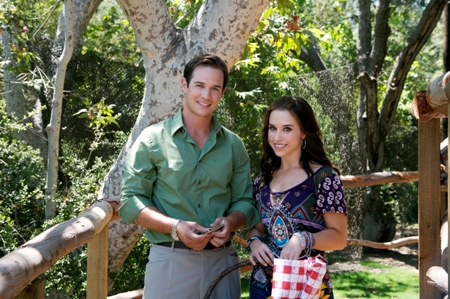 SheKnows: That’s just one reason it is such a pleasure to speak to you today for your Hallmark movie. Talk about a cultural icon…

Lacey Chabert: Oh, thank you! It was so nice to be involved. I’ve never done a Hallmark movie before.

SheKnows: How did you find that? I’ve talked to many actors and actresses who find the Hallmark movie shoot simply so pleasurable. And these are also performers who come back
to Hallmark quite often.

Lacey Chabert: I would do another one, absolutely. I was a really fun, positive experience. The script was really charming. Working with Ryan Merriman was really fun because we
have a lot in common. We were both child actors. We shared a lot of stories about being young and growing up in the industry. I enjoyed it, nothing but good things.

SheKnows: What aspects of your character did you most enjoy wrapping your head around?

Lacey Chabert: I like that she is a free spirited woman who doesn’t want to be tied down to one thing. She really explores all facets of life. That was a great character to
play because it’s something that makes her charming and also holds her back. She has this almost fear of commitment and making a decision she’s going to regret. Throughout the film she
has to grow up in realize at some point in life you do have to make decisions.

SheKnows: The premise of Elevator Girl is quite unique in the sense of how this romance begins. Not many romantic comedies place their main characters stuck in an
elevator. This is a situation that most people dread, but getting stuck in an elevator worked out pretty well for your character.

Lacey Chabert: That’s right. It’s a nice. I like what it says about love at first sight. When you do meet someone and there’s that attraction that you really
can’t deny and there’s this instant connection — that spark — is something every woman should explore.

SheKnows: You mentioned starring opposite another former child actor. What you do think it is, there are so many pratfalls along the way, but you have maintained a real steady head
over the years.

SheKnows: It may be hard for you to quantify. 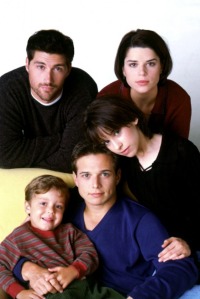 Lacey Chabert:
(Giggles) It is, having my family, having my parents be really protective of me as a kid is something a I look back on and have great appreciation for — I know they sheltered me a lot
when it comes to certain things that could have led me down the wrong path. Just really loving what I do, even when I was a kid and go to the set, I loved it. I loved reading a script. I loved
running my lines. I just wanted to do the best job I could. It’s the way I go about my work now. I think I was so focused on doing good work. Especially being a part of Party of
Five, that was such a long-running experience. I just wanted to make everyone there proud. I was focused on the work, and school was really important. I had friends outside of the business. I
think that had something to do with it

SheKnows: Also, if you look at the cast of Party of Five, sure Matthew (Fox) and Scott (Wolf) were older, but none of you ran into those young actor troubles.

Lacey Chabert: No, they’re all such lovely people. I’m so grateful that was the show I grew up with — that group of people. Because when you’re around someone
that much, you can’t help but be influenced by them. I’m so grateful they were all people of such character. They taught me good things.

SheKnows: I think for you, it would be a proud achievement to…I was thinking about this the other day, that not too many ensemble casts – each member of that cast goes
on to have a very significant career on their own. That is the cast with Party of Five with Matthew Fox, Neve Campbell, Scott Wolf, you and Jennifer Love Hewitt.

SheKnows: You bet it’s true! That must have been such a rich environment.

Lacey Chabert: It was, I watched Matthew last night on Lost. One of my favorite shows! 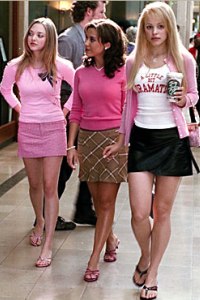 Lacey Chabert: Love it!
OK, I’m so confused though.

SheKnows: We could talk about Lost for a year.

Lacey Chabert: Sorry, yes. I agree. Yes, back to Party of Five, it was a good show. The writing was good. The characters were really solid and we all challenged each other
and helped each other. I feel each week everyone brought their absolute best. It was so exciting when the show got recognized by the Golden Globes (Best Drama). I wouldn’t trade it for
anything.

SheKnows: Yeah, I was very excited about the show’s success. I went to George Washington with Scott (Wolf).

Lacey Chabert: Oh my gosh! What a small world.

SheKnows: A small world indeed as I am now talking to you. And…has he not changed a bit?

Lacey Chabert: Not at all.

SheKnows: Lastly, if you were stuck in an elevator with anyone living or dead, just to pick their brain. Who would it be?

Lacey Chabert: I’ve been thinking about this and it would be Natalie Wood.

Lacey Chabert: Just because I think she had such a special presence and magic on screen that not many people have been able to capture since. I would love to talk to her.