Movies and James Cameron are synonymous. His Avatar and Titanic are the number one and number two movies of all time. After sweeping the Academy Awards for Titanic how do the Oscar roses smell this time out for Avatar and its headline-grabbing 2010 nominations?

SheKnows: How thrilled are you to win this award nomination?

Cameron’s demeanor does not change.

James Cameron: This is me ecstatic. I couldn’t be more thrilled the team that made the film. It took many, many artists to breathe life into the world of Pandora. I think that is what is captivating people. Of course, we have a great story and an awesome cast. It’s that totality that makes us directors look good. 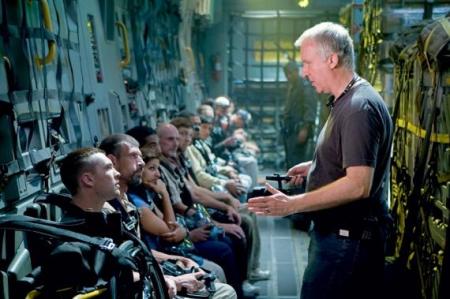 SheKnows: The nominations for Best Picture and Best Director on a film such as Avatar — are there any way to not lump them together?

James Cameron: I don’t really know how to tease them apart in my mind because again, it’s the totality of the film. With Avatar, I think it’s the whole experience of the movie is being reflected here so, I didn’t design all the creatures. I didn’t design all the plants, the trees and all of those things that make the movie feel so real like you have been to another planet. This is such a great thrill.

SheKnows: Although Avatar took years to bring to the screen, the film was in your head for a long time…

James Cameron: I wrote the outline in 1995, but I was thinking about the film for 25 years before that. I think it’s awesome that James Horner’s getting honored for the score. This is all kind of a surprise in a sense because Titanic, you might think that would be the type of film that would be a critic’s darling. It’s a period piece. This (Avatar) is science fiction and fantasy. And that is often trivialized as a commercial genre. That’s what makes this particularly sweet. Almost in the same way that when Sigourney (Weaver) got nominated for Best Actress on Aliens back in ’86. It’s a genre picture and she’s getting nominated back in 1986. It made it sweeter in a way.

James Cameron: We’ll have to see — if it changes things — it changes things. One thing Avatar could do, because of its success especially like its critical success like tonight, is give permission to other filmmakers to think of 3-D as something that is not necessarily relegated to animation for kids movies or schlock horror films

SheKnows: How does winning the Golden Globe for Best Picture, Drama play in your greatest hits?

James Cameron: This Best Picture Golden Globe, in the history of the Golden Globes, only one other science fiction film has gotten Best Picture Drama — one — and that’s ET. You’ve got a genre that has always been critically treated as a second class citizen. Hopefully, this is a part of a trend of accepting science fiction as a dramatic form of cinema. Not a genre, but a form of drama.

SheKnows: When it comes to the Oscars, where is your head?

James Cameron: I’m just keeping my head down and staying out of it. Certainly, sometimes the Golden Globes are a precursor. But the Academy members are going to make up their own minds. They always do.

Oscar predictions: Who will win?
Oscars 2010: Who was snubbed?
Visiting with James Cameron on the Blue Carpet Avatar premiere