The Princess and the Frog went back to the future to achieve its place among the five best Oscar nominees for Best Animated Film. 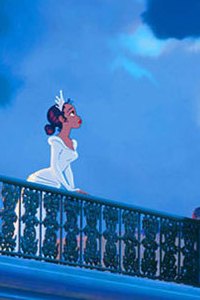 The brain trust and star Anika Noni Rose share insight into what it was like to craft a Disney film that went back to the painter’s palette to create an old-school, Disney 2-D classic for a new millennium’s audience.

“I remember wondering if there would ever be a “Chocolate Brown,” after seeing Snow White,” said star Anika Noni Rose.

“This [movie] will mean different things to different people, depending on what time they grew up in,” she added.

As with any film, the cinematic journey begins with the viewer.

“Each person in that theater will have a different journey that they’re bringing to the story, and it will make the story different for them,” she continued.

That said, don’t expect to see a tale about the racial revolution, or even one that reflects the hateful times in which the film takes place.

There is one aside about “girls like you,” but there’s no explanation of what that means and no discussion of Tiana’s race. What more, her best friend is a rich, white New Orleans princess and the interracial element of the love story is both never mentioned and easily missed, as Tiana and Naveen are both green for most of the movie.

There was an uproar over this before the movie was even released, but Edwards related, “We kept saying: Wait till they see the movie. To make this about race is to completely miss the point of making a musical fairy tale to make people happy.

“We wanted to make a princess for everybody.”

The Princess and the Frog, however, marks a major first for Disney in offering kids their first African American princess, not to mention an interracial love story.