Meryl Streep’s dream role in Julie and Julia extended the actress Oscar record as the Academy’s most decorated actress. When Streep slipped into Julia Child’s shoes for the Nora Ephron directed instant classic, she landed her 16th Oscar nomination. 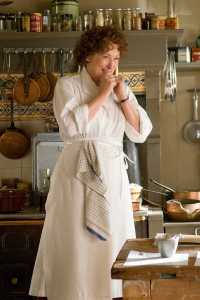 This time out our era’s most talented thespian delved into a world where she treasured every second inhabiting the world of a culinary icon in Julia Child.

As her half of the title, Streep sounded all the right notes alongside fellow nominee Stanley Tucci (for The Lovely Bones) and may find herself thanking the Academy, Tucci and the queen French cuisine for Americans — Julia Child.

SheKnows: First of all, what do you make of Julia Child and her opinion of the other half of Julie and Julia, Julie Powell?

Meryl Streep: Julia Child was in her nineties and was not amused by the fact that Julie Powell was writing a book blog cooking her way through Mastering the Art of French Cooking by Julia Child. She was disgruntled because she felt this person was not being serious about cuisine. Julia was a sunny personality, but she really took this quite seriously.

Meryl Streep: Julie was offended by the language. She was a lady of a certain age and a certain time when you didn’t say (expletive) all the time (laughs).

SheKnows: Did you pick up any culinary tips while researching the master?

Meryl Streep: I have four children. I have been cooking for many years — but, not well (laughs). In Julie and Julia, it was an inspiration to dive back in. There aren’t so many diverse palettes in the group. Like, one of my children only ate white food for many years it was really to accommodate to that. It’s more fun now when it’s just me and my husband.

SheKnows: Sixteen nominations from the Academy, how on earth do you still wrap your head around what you’ve done?

Meryl Streep: It means a great deal to have the appreciation of the people in my community — my film community. It’s a little family. I don’t live in the glare of the spotlight. I come from little outside life and come into this room where everyone I’ve ever worked with is people I love, people I would love to work with, people whose work I’ve followed forever, it’s like a homecoming to be able to come to these award shows.

SheKnows: Considering your accomplishments and accolades, why are you not on the paparazzi radar?

Meryl Streep: For me coming up, there was no such thing as the 24-hour news cycle. I think for younger actress, the scrutiny is very, very hard. Where everybody comments on their weight and appearance endlessly, that always happened, but only happened in apartments and restaurants. Now, it’s kind of a relentless drag on people’s work. It interferes with your ability to be a good actress if you have to be self aware all the time.

Read on for more oscars

Oscar predictions 2010: Does Meryl win again?
The Oscar nominees react to the good news
Oscars’ 2010: Who was snubbed?