Anna Kendrick may have taken the Twilight train to stardom, but it is her turn opposite fellow Oscar-nominee George Clooney and Vera Farmiga that has catapulted her into another level of Hollywood fame.

SheKnows: What first appealed to you about working on Up in the Air?

Anna Kendrick: The script. It’s absolutely gorgeous. I love the way that it doesn’t underestimate people. It’s so intelligent and it’s unpredictable, and it’s never formulaic. This character is so unique. It’s an incredibly difficult thing to find for a young woman — where she’s got her own story and her own journey. It’s not just the man’s journey. 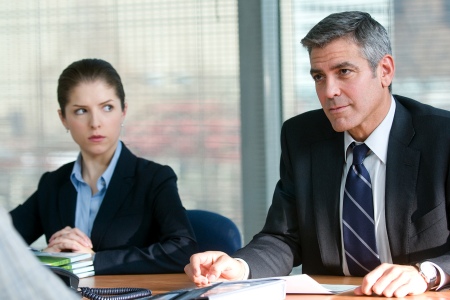 SheKnows: Did any aspect of your character surprise you when you started wrapping your head around portraying her?

Anna Kendrick: Once she has this kind of meltdown, there was a part of me that instinctually wanted to make her hide a little bit more and didn’t want to turn to the one person who’s been giving her a hard time about her life’s philosophy. To let her really seek solace in Ryan and the degree to which she lets herself melt down was kind of surprising.

SheKnows: And the chance to work with Vera Farmiga and George Clooney — I suspect wasn’t a negative?

Anna Kendrick: No, not at all. That was a really exciting thing. I was so scared of meeting them! I was more intimidated by Vera than I was by George. No matter where you go in LA, there’s at least somebody telling you, “Oh, he’s [George Clooney] fantastic, he’s wonderful.” Vera was more of a mystery to me and she plays these incredibly strong women and she didn’t seem like one who would suffer fools. She couldn’t have been warmer or more playful.

SheKnows: What about Jason Reitman? He’s such a talented director.

Anna Kendrick: Yes. The scary thing about him is that he’s such a tough read and, at the same time, he’s so intuitive. He reads people instantaneously. You’re never really sure if he’s being sarcastic or not. He definitely keeps you on your toes. He’s so brilliant that it’s nice to be challenged like that every day.

SheKnows: When you do a film, a stage production or something based on a book, when you’re actually molding your mind around the character, do you turn to the book at all, or would you rather focus more on the words on the page because that’s more where you’re at?

Anna Kendrick: In the adaptations that I’ve done, the character is either not in the book, or is kind of different in the book, so I haven’t yet relied very heavily on novels. If it were truer to the book, I’d probably be one of those people who carry it everywhere I went.