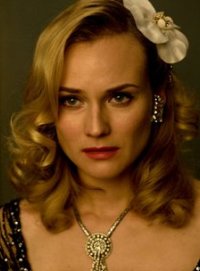 Kruger welcomed the opportunity to join the fraternity of Tarantino in Inglourious Basterds.

Playing with the boys

SheKnows: There was kind of a boys’ club around you in the film. Was it fun to be working with all these guys or frustrating at times?

Diane Kruger: (Laughing) What do you think? They turn around and I’m like, “Nice uniform.” Come on. They’re all pretty handsome guys and they were all strutting around in their uniforms. It was fun. But it was also fun to be one of the guys, to be a character that’s not the pretty thing sitting in the corner but getting down and dirty and playing with the boys. That what’s fun.

SheKnows: How did Quentin shepherd you into this world that is part reality and part fiction-fantasy?

Diane Kruger: It’s pretty much on the page. You read the script and, truly, what you see on screen is what the script was like so that wasn’t hard. Actually, what is hard is you have to hold back a little bit especially with my character doing that German accent, it went a little too far at times (demonstrates in clipped German accent) “Vat are yoo tawking about?” It became like a stand-up, stupid joke, so you don’t want to do it too big at times.

SheKnows: What surprised you the most when you were able to see the completed film?

Diane Kruger: There’s a big chunk that’s not in. The script was so long originally, so when I first saw it I was like, “wow, you don’t miss that at all.” When you read a script, you can’t imagine (a scene) not being in the actual movie. Then you see the movie and you think, “Oh, why was that even in the script?” And then, I was surprised at quite how funny it was. I knew there were jokes in the movie but there were moments where I truly laughed out loud and thought, “It’s so inappropriate to laugh right now.”

SheKnows: Did you like your wardrobe? It was stunning. Did you keep anything?

Diane Kruger: I kept a lot. What’s not to like, right? Pretty nice. It’s going to be in a closet. I can’t wear it ever again. Actually, that’s not true, those silver shoes that he takes off, I wore in Cannes for good luck, so I’ve got those — and I’ve got the handmade shoes I wear in the tavern because they were made for me. I got one of the evening dresses and one of the big posters that we did. That was such a fun day to do the photo shoot. 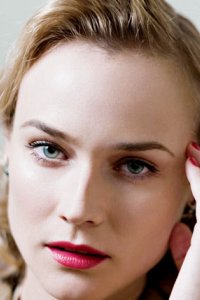 SheKnows: How did you keep from cracking up in the scene where Brad Pitt is doing an atrocious Italian accent?

Diane Kruger: I know — it was awful. We all did (crack up). We had to stop a couple of times because Quentin sits next to camera and he has his headset on and he’s like a little boy watching and he’s like (she does a Quentin giggle), and we said, “Quentin, you have to stop laughing. We have to get this.”

SheKnows: How hard was it to play the duality of your character? She’s this gracious movie star flirting with all the guys and then, when she’s with the Basterds, she’s sarcastic and kind of tough.

Diane Kruger: She’s such a great character in that sense. Also, and it was important to Quentin, when you watch movies from the ’40’s — acting was really different. It was formal and a little put on, like it seemed supernatural in a way. He really wanted that in the beginning of the film. When you first see her in the tavern you have to immediately know, “Oh, she’s the movie star.” When she talks, nobody else does, and she has this commanding presence and you have to, right away, know that she’s this incredibly smart, intelligent woman.

SheKnows: Your co-star Christoph Waltz (Oscar nominee for Best Supporting Actor) has this way of being threatening and disarming/charming at the same time. How was it to act with him and react to that? Did you rehearse to perfect it?

Diane Kruger: No, not at all — but that’s why working with great actors makes your job a lot easier because all you do is play the scene. You react to what he puts out or what I would put out. I had no idea who he was before this movie. I had never heard of him. The few scenes that I had with him, he was truly scary. I mean honestly, I could not have done that scene in the office. My character knew that the minute she steps into that room, she’s not gonna come out alive. But, the cat and mouse play that he puts on was scarily real.