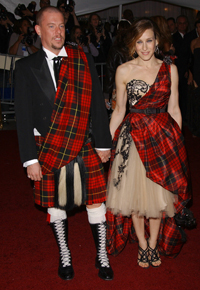 While police have so far refused to comment on the manner of death, sources close to McQueen (whose real first name was Lee) have confirmed his death was a suicide. The designer’s mother, to whom he was extremely close, died just a few days ago; his fashion mentor, style guru Isabella Blow, killed herself in 2007 after being diagnosed with ovarian cancer.

Company representatives for the fashion house released the following statement:

“At this stage it is inappropriate to comment on this tragic news beyond saying that we are devastated and are sharing a sense of shock and grief with Lee’s family.

“Lee’s family has asked for privacy in order to come to terms with this terrible news and we hope the media will respect this.”

The house’s contemporary line, McQ, was scheduled to be shown at New York Fashion Weekthe day of the designer’s death.

McQueen was named Givenchy’s head designer in 1996 before partnering with Gucci, who bought a majority share of his company. Openly gay, the designer once described himself as the “pink sheep” of his family and married filmmaker George Forsyth in 2000.

The fashion world, gathered in New York for fashion week, is stunned by the news. Vogueeditor Alexandra Shulman said: “Lee McQueen influenced a whole generation of designers. His brilliant imagination knew no bounds as he conjured up collection after collection of extraordinary designs.

“At one level, he was a master of the fantastic, creating astounding fashion shows that mixed design, technology and performance and on another he was a modern-day genius whose gothic aesthetic was adopted by women the world over. His death is the hugest loss to anyone who knew him and for very many who didn’t.”

Former Alexander McQueen CEO Sue Whitley said, “This is devastating news. He was an unforgettable part of my life. He was a talent who was beyond others. People who worked with him would give 100 per cent and more because he was totally inspiring. This is an unimaginable loss for the fashion world.

“He was able to bring creativity to whatever he turns his hand to, from perfume bottles to every piece of clothing. It is a dark, dark day to hear this news. he was a British icon in fashion whose loss is unimaginable.”