The earthquake in Haito has left three million Haitians homeless or injured and killed more than 200,000. So after catching the Super Bowl on February 7, Angelina Jolie visited Haiti to lend support to survivors.

The actress and humanitarian was spotted at the Dario Contrera Hospital in Santo Domingo on Monday, accompanied by Gonzalo Vargas Llosa, a rep for the UN High Commissioner for Refugees and the son of Peruvian writer Mario Vargas Llosa. 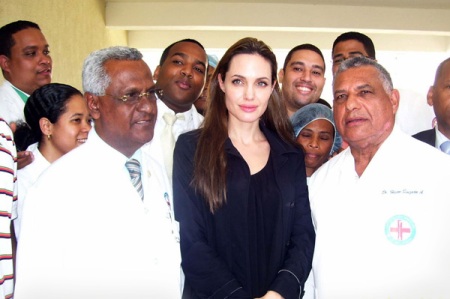 On February 9, she was off to Port-au-Prince, Haiti, where she visited with kids in the SOS Children’s Villages for orphans, as well as patients of all ages at the Medecins Sans Frontieres Hospital. She also took time for to meet with UN senior staffers at their headquarters near the capital and with Haitians employed in the disaster cleanup.

Seemingly worlds away from the cushy life she shares with hubby Brad Pittand their brood, word is she spent the night at a Brazilian military camp outside the city.

February 10’s schedule was set to include a visit the southern city of Jacmel, a camp those left homeless by the quake and a Save the Children relief supply center before she returns to the Dominican Republic.

Video and photos show just how excited locals were to be near the actress (see below), who stopped to shake hands as crowds chanted her name. In addition to being on hand to lend support, Jolie and Pittreportedly donated $1 million to Doctors without Borders’s medical operations in Haiti.

“It is incredibly horrible to see a catastrophe of this size hit a people who have been suffering from extreme poverty, violence and unrest for so many decades,” Jolie said in a statement.

Meanwhile, the couple is reportedly set to sue British tabloid News of the World, which broke the recent story on the Brad and Angie breakup that quickly went viral on the net. The story was chock full of sources sharing top secret info on their custody and financial settlements and now, with the paper refusing to retract their story, word is Jolie and Pitt will sue over the “false and intrusive allegations.”

more on haiti and efforts to help