John Mayer talks sex with Jessica Simpson and drops the N-word in a shocking interview with Playboy. 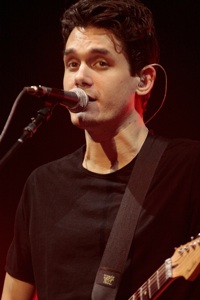 Talk about TMI… John Mayer tries his hardest to make sure men really do read this month’s issue of Playboyfor the articles by giving his most ridiculous interview to date.

In it, Mayer describes sex with ex-girlfriend Jessica Simpsonas “sexual napalm,” his genitalia as white supremacist leader David Duke and even drops the N-word. For real.

Excerpts? Here they are, heavily edited — this is a family-friendly site, you know.

On dating black women: “I don’t think I open myself to it. My (expletive) is sort of like a white supremacist. I’ve got a Benetton heart and a (expletive) David Duke (expletive). I’m going to start dating separately from my (expletive).”

On Jessica Simpson: “That girl, for me, is a drug. And drugs aren’t good for you if you do lots of them. Yeah, that girl is like crack cocaine to me. Sexually it was crazy. That’s all I’ll say. It was like napalm, sexual napalm. Have you ever been with a girl who made you want to quit the rest of your life? Did you ever say: I want to quit my life and just (expletive) snort you? If you charged me $10,000 to (expletive) you, I would start selling all my (expletive) just to keep (expletive) you.'”

Wow. Tell us how you really feel, John.

Mayer, who is currently touring in support of his latest album Battle Studies, took to his Twitter(of course) to apologize for his n-word remarks, but not to Jessica Simpson.

He wrote, “Re: using the ‘N word’ in an interview: I am sorry that I used the word. And it’s such a shame that I did because the point I was trying to make was in the exact opposite spirit of the word itself.

It was arrogant of me to think I could intellectualize using it, because I realize that there’s no intellectualizing a word that is so emotionally charged. And while I’m using today for looking at myself under harsh light, I think it’s time to stop trying to be so raw in interviews…

It started as an attempt to not let the waves of criticism get to me, but it’s gotten out of hand and I’ve created somewhat of a monster. I wanted to be a blues guitar player. And a singer. And a songwriter. Not a shock jock. I don’t have the stomach for it. Again, because I don’t want anyone to think I’m equivocating: I should have never said the word and I will never say it again. “

read on for more john mayer