American Idol water cooler chatter is usually about both the contestants and the judges, but today, it’s all about Ellen DeGeneres. DeGeneres kicked off American Idol Hollywood Week and rocked her first night behind the table.

Many dedicated American Idol fans were wary of the show’s newest judge,
who has no musical experience and didn’t really wow during last season’s guest spot on So You Think you Can Dance, but the reviews are in and the general consensus is that Ellen was a hit. 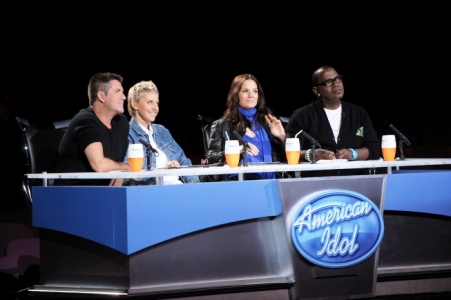 She came off as both fair and frank and even as she doled out cutting criticism, her style served as a solid complement to Idol’s king of caustic, Simon Cowell.

The comedian also found the appropriate balance in the funny department. No one wanted a full scale comedy act, but we expected some giggles and DeGeneres delivered with her signature observational sense of humor, firing off quips like, “There’s a fine line between sexy and scary.”

At one point, she even got laughs by making homage to A Chorus Line and asking participants to step forward, back and side to side, before declaring they’d all graduated to the next round.

Being the new kid on the panel is never easy, however, as judge Kara DioGuardi can attest.
There are bound to be unhappy viewers, along with plenty of rumors about behind the scenes tension, and this year is no different.

DioGuardi got on the phone with reporters for a press conference and was quick to dispel the newest round of rumors, calling talk of Ellen-Simon tension ridiculous and reminding us that last year, the chatter all
about alleged tension between her and Paula. She also had nothing but raves for Ellen, saying the newcomer were “very funny and critical and had heart.”

“I think she knows more about music than you think she does,” DioGuardi contended. “I felt she had a really good handle on whether a contestant had a potential, whether they had star quality. She
knew if something was off in the vocals or in the performance. I thought she delivered the message with kindness, but also had criticism in there.”

As for the reports that Howard Stern may take Cowell’s seat next season,
DioGuardi is one of many who hope that’s just a rumor.

“If you’re going to replace Simon, you have to have that background. You have to be somebody who knows about signing great artists and being a part of their career from the very beginning to the
very end,” she insisted.

The network has said it will take it’s time in replacing Simon, so for now, SheKnows is just going to enjoy the show.

Who can replace Simon?