Academy Awards night is among the biggest fashion events of the year. Billions of viewers around the globe tune in to see what the stars are wearing on the red carpet (and of course, to see who takes home the Oscars). Though most of us can’t afford designer gowns and celebrity stylists, we can steal the looks from Oscar night. Read on to find out how to mimic Oscar gowns, makeup and hair for your next big night out.

Steal the Oscar Look: The gowns

At the 2009 Oscars, Taraji P. Henson wore a beautiful white tiered Roberto Cavalli gown. Though the original costs several thousands of dollars, you can get a relatively similar gown from BCBGMAXAZRIA. This laser-cut satin gown in off-white is priced just under $300 at Nordstrom.

You can find dresses at major department stores that are generally similar to those on the red carpet; however, some makers specifically create knock-off styles of celebrity gowns and offer them for sale a day or two after the awards shows. 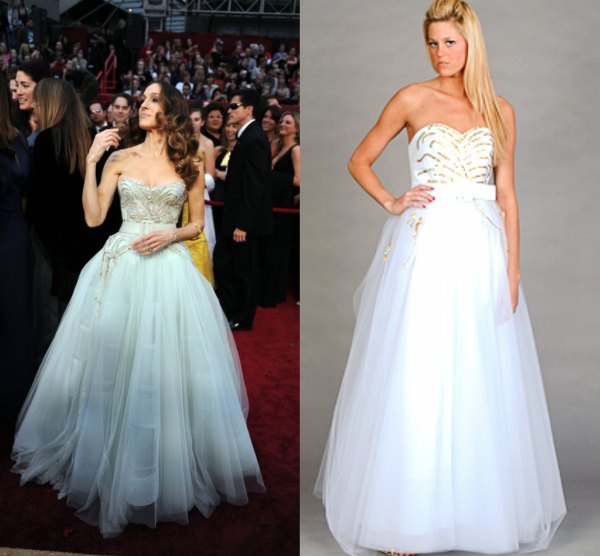 At the 2009 Oscars, all eyes were on Sarah Jessica Parker in her Dior Haute Couture belted chiffon ballgown. If you loved SJP’s dress, you could steal the look with the replica created from Faviana. This dress was priced at $338 at edressme.com

Faviana creates a number of replica gowns. Angelina Jolie wore a black Elie Saab gown at the 2009 Academy Awards, and Faviana served up a replica the next day with a very similar sweetheart neckline and draping. This dress was available at edressme for $258. Visit Faviana.com to check out more celebrity red carpet dresses to dress like a star at your next party or special event. TabloidStyle.com also offers a variety of Oscar-like gowns.

Next up: The makeup