It’s not every day that we get to sit down with some of Hollywood’s biggest female stars, whose first names all happen to start with the letter “J” (Julia Roberts, Jennifer Garner, Jessica Alba, Jessica Biel). The ladies of Valentine’s Day dish relationships, family and give love tips! This cast of the new, star-packed rom-com Valentine’s Day ought to know and we’re happy they are sharing! 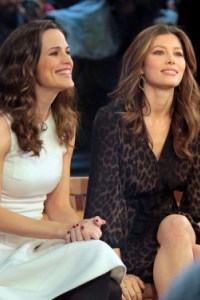 In
recent years, three of the popular actresses have become moms; Jennifer Garner has two offspring with hubby Ben Affleck, Roberts has three, including twins with cameraman hubby Danny Moder and Jessica Alba has a baby girl with husband Cash Warren. Okay Jessica Biel, no pressure or anything!

The stars are helping us celebrate Valentine’s Day with their film about interconnected love relationships in LA. Since the storylines are only marginally connected, only Garner and
Biel actually worked together on the movie. That fact doesn’t keep the other ladies from forming a mutual admiration sorority that
SheKnows was happy to join!

At a posh Beverly Hills hotel, we were able to sit down with all of these beautiful and talented women who were all in a lighthearted and fun mood so get ready for our upbeat, casual and romantic
girl chat.

SheKnows: We love the idea that the right one could be your best friend who has been there all along. Was there a moment you realized a friendship became more?

Jennifer Garner: Somewhere around the second kid I thought, ‘This is turning into something.’ (laughter)

SheKnows: Did you know all along that he might be the one?

Jessica Biel: I guess that’s been more my experience too (hooking up with a best friend dude?).

Jennifer Garner: You were never friends (Jessica and Justin Timberlake?).

SheKnows: Okay, moving on.. What’s the key to a successful relationship, especially in LA.?

Julia Roberts: I think it’s the same in any city. LA isn’t distinctive in its uniqueness to what makes a relationship work. Two people who work at it in any town you go
to. That’s what works. 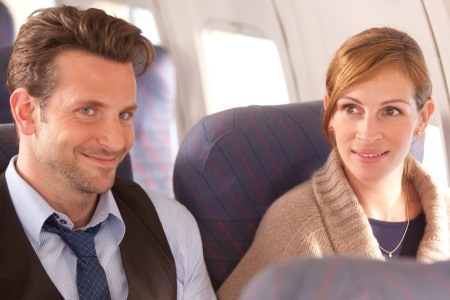 SheKnows: This film is kind of a love letter to Los Angeles. What do you love about LA?

Jessica Alba: The mountains and the ocean.

SheKnows: But this film is universal, not just an LA. film don’t you think?

Jennifer Garner: It’s just a city (in the film). It’s not celebrity-centric. It’s not about Hollywood. It’s a city and you never see it that way. You always
see it as the backdrop for some other world and glitz and glamour. This reminds you that this is just a city full of people going through the same kinds of little triumphs and tragedies in their
love lives as anyone anywhere else in the world.

SheKnows: Those of you with kids, how do you find time for romance with kids at home and how will you celebrate Valentine’s Day this year?

Jessica Alba: Mine goes to bed at 7 but I’m usually too tired, unfortunately.

Jennifer Garner: You change the definition of romance. I mean, romance is romance, but in addition, romance can just be breakfast over the tops of heads. Just getting through the
day, you’ve just got to create that way to be romantic.

Jennifer Garner: I think most of us will be promoting a movie. That’ll be romantic. 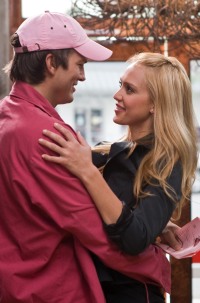 Jessica Alba:
We’re pretty spontaneous like she said (Garner). We try to squeeze in a smooch here and there, a little card, just a note to say ‘I love you’.

SheKnows: Jessica Biel, your character turns to chocolate. What do you turn to for comfort at disappointing times in a
relationship?

Jessica Biel: That’s where it usually starts (with the chocolate).

Jennifer Garner: I would recommend (hitting) a pinata (in the film, Jen’s character learns she’s been cheated on and whacks the bee-jesus out of a heart-shaped pinata!)

SheKnows: What would you suggest to put our guys in a romantic mood on Valentine’s Day?

Julia Roberts: Can we at least dim the lights? Okay, wait a minute. Are you asking me how to cook something? Or…Ah, yeah, well, hmm. Let’s break it down. How long have you
been with your boyfriend? Two years. And you have sex with him.

Julia Roberts: Well, talk to your friends here. You opened Pandora’s Box, Pandora. Now, if you want him to make you happy, where’s the problem? Because we can fix this
(We are all dying laughing by now). Okay, make a nice dinner reservation now because that’s the biggest night out of the year, says the former hostess at Simon’s Seafood Bar
and Grill. Make a nice dinner reservation and have a nice glass of wine and then go home and, you know, take your top off. I think that’s a recipe for success!

SheKnows: Everybody wants that great, tingly love feeling. We all seek it out, right? 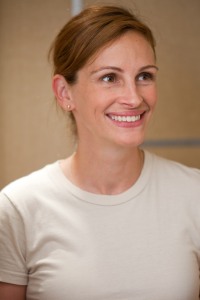 Julia Roberts: It is a drug
isn’t it? Love and that feeling and what it does to make us all tingly inside and crazy right? It’s a drug.

SheKnows: There is a huge cast in this film and several stories to tell. So did any of you actually meet doing the film?

Jessica Biel: Right back at you.

SheKnows: Everybody here has a perfect figure. Does anyone want to tell us what do you do to keep it?

Julia Roberts: You girls are slim.

Jennifer Garner: I’m still breast feeding, but after that I’ll plump up.

SheKnows: Did any of you want to play someone else’s character in Valentine’s Day?

Jennifer Garner: Well Julia got to sit the whole time and she pushed the cry button at the end (of her story).

Julia Roberts: I haven’t seen it. Does it work?

Jennifer Garner: It’s like ding! (she makes the sound of a bell going off). I knew it was coming so I’m like, “don’t be crazy” but (pretending to cry)…yes.

Julia Roberts: Well breast feeding does make you kooky too.

SheKnows: Jennifer Garner, great work with the baseball bat (hitting the heart pinata) Where does that come from?

Jennifer Garner: I was going for a more Eccles thing than Lowell. I like to be compared to Papy but he had an off year. I would say Manny (Ramierz, former Red Sox player), but
he’s not there anymore. No, I like batting cages as much as the next girl. Girls can do those things. We grew up doing that stuff too. (Southern accent) We tip our cows like that where
I’m from (West Virginia).

SheKnows: Julia, how did it feel to be reunited with director Garry Marshall and some of the crew of Pretty Woman after years? 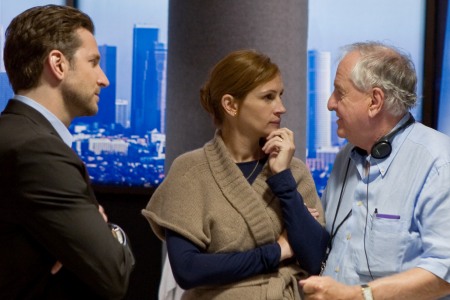 Julia Roberts: Well we had a lot of Pretty Woman people. That sounds funny. That sounds grammatically incorrect. Our DP (Director of Photography) Chuck Minsky shot
Pretty Woman and our prop department. We laughed about a lot of things — particularly how old we’ve all gotten in 20 years. 20 years older in fact in 20 years. Every 10 years we do
this. We did Pretty Woman and then 10 years later we did Runaway Bride and then 10 years later Valentine’s Day. So I will see all of you back here when I’m
51.

SheKnows: We hear that Garry’s instructions to actors need a little translation. Can you give an example of how you’d translate?

Julia Roberts: If Garry were to say to you as an actor, “Do the thing with the thing and then go over there and be funny. Action!” That would mean “sit up straight, smile, look to
your co-star, say your lines and be very funny. Action.”

Don’t miss our interviews with the guys of Valentine’s Day February 11!

Read on for more Valentine’s Day

Live from the red carpet premiere of Valentine’s Day

Who’s the next Julia Roberts? Many are in Valentine’s Day!