Eric Bana and Rachel McAdams fight to make love work in spite of difficult odds in Time Traveler’s Wife, out on DVD February 9. 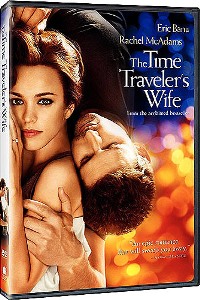 Based on the number-one best-selling book, The Time Traveler’s Wife is a romance that chronicles a tale of true love that survives throughout all times.

Henry De Tamble (played by Aussie Eric Bana, of The Other Boleyn Girl and Star Trek) is a librarian with the strange gift — or curse — of traveling involuntarily back and forth
through the years. His already eccentric life is altered when he meets a young girl named Clare (Rachel McAdams of The Notebook), who is destined to become the love of his life.

Thrown together and thrust apart at the whim of Henry’s genetic gift, the pair meets throughout the years, never knowing how or when they will see each other next. In spite of their unstable fate,
they make the most of their strange time together, while Clare remains committed to the only man she’s ever loved and intent on making their life together work.

SheKnows went straight to the stars for the scoop on the film when it first hit theaters to hear what they had to say about their sizzling onscreen chemistry, keeping track of time in a movie that
jumps around and what they thought of the book that spurred the flick.

“I think the core of the book is most definitely there in the screenplay and in the film,” promised Bana. “All the major players involved identified the key element: This impossible love between
two people who get wrenched apart by this time-traveling device.”

Fans of the book who are still wary of how the story was handled on the big screen should check out our chat with screenwriter Bruce Joel
Rubin, who has an Oscar for Ghost, talked to SheKnows about what kind of changes he made and what you can expect from the film.

He also reveals the final product was so long in the making that he had Brad Pitt and Jen Aniston in mind when he wrote the script, and insists
the effort paid off — even if that meant he couldn’t use Brad and Jen!

“This film, I can promise your readers, is a fantastic emotional adventure,” he said.

The Time Traveler’s Wife is now available on Blu-ray, DVD and for
download!

Read on for more The Time Traveler’s Wife