Dr Conrad Murray has been formally charged with involuntary manslaughter in the death of Michael Jackson. 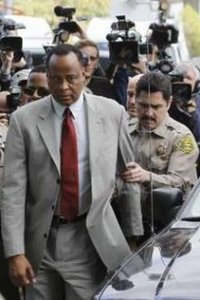 Murray was arraigned in a Los Angeles County court and pled not guilty to charges of involuntary manslaughter.

Bail was set at $75,000 — three times the standard amount for such cases — and Murray was forced to surrender his passport.

In addition, the presiding judge prohibited Murray from possessing or prescribing any anesthetics. “I do not want you sedating people,” the judge said.

During the procedure, the state medical board filed a motion to have Murray’s license revoked.

The Jackson family made their presence felt in the courtroom. Joe, Katherine, Jackie, Rebbie, Jermaine and La Toya all watched as the legal portion of their grieving process began. Michael’s three children were not present.

The coroner’s report, obtained by TMZ today, confirms that Jackson’s manner of death was homicideand that Propofol was to blame. According to the report:

“1. Circumstances indicate the Propofol and the benzodiazepines were administered by another.

2. Propofol was administered in a non-hospital setting without any appropriate medical indication.

3. The standard of care for administering Propofol was not met. Recommended equipment for patient monitoring, precision dosing and resuscitation was not present.

4. The circumstances do not support self-administration of Propofol.”

Officials found 11 bottles of Propofol in Jackson’s home and 12 other prescription medications written to various names. If convicted, Murray faces a scant four years in prison.