Jennifer Aniston turns 41 February 11, so she hit Mexico for some fun in the sun with her best pals and rumored new love — Gerard Butler. 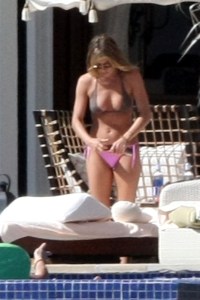 The photos of Aniston in Cabo San Lucas on February 6 on vacation are out (at right)! They showcase a gorgeous, bikini-clad Aniston hanging out poolside with Courteney Cox, Sheryl Crow, David Arquette and her rumored love interest, Gerard Butler.

Fans may recall that Aniston celebrated the big 4-0 last year with a risqué and nearly naked GQ cover that read, “Lordy, Lordy, This Woman is 40.”

Needless to say, she looks just as smashing a year later in these new Aniston bikini shots, but it’s her Butler, not her bikini, that has everyone talking.

Word is her costar from the upcoming flick The Bounty Hunter showed up a few days into the trip and was on hand for her big b-day fiesta at Aquos restaurant.

Since Aniston’s infamous split with ex-hubby Brad Pitt in 2005, she’s made a run of it with Vince Vaughn and John Mayer, who recently admitted he’s still not over her breakup, while Pitt has moved on with Angelina Jolie.

Interestingly, Aniston’s upcoming flick, Bounty Hunter, with Butler involves a bounty hunter who tracks down his on-the-lam ex wife and efforts to bring her in. Calamity ensued and early reports point to sizzling sexual chemistry. The set up sound an awful lot like the romantic comedy version of Mr & Mrs Smith, the action flick that introduced Pitt and Jolie.

Mirroring what happened with Pitt and Jolie while filming the Smith’s, speculation abounds about a romance between Aniston and hunky Butler starting while they were still shooting Bounty back in July.

They were spotted being affectionate offset, but Butler shrugged off the talk, saying they get a good laugh out of the rumors. “She’s like my best buddy,” he said back then. “She’s so down-to-earth, so easy going. She’s incredibly self-deprecating and again, just alive! I’m having fun doing this!”

The chatter hit high gear last month, however, after Butler escorted Aniston to the Golden Globes. The pair worked the red carpet together, posing arm in arm, and was also reportedly spotted kissing behind the scenes. Us Magazine even claims their “canoodling” was so overt that they were the talk of the walkie-talkies at the event. Word is they again drew attention with a longing eye-lock during the Hope for Haiti event.

With Bounty Hunter set to open March 19, all this press about their chemistry can’t hurt…and if they’re a couple, well good luck to them. Either way, happy birthday, Jen!