Super Bowl commercials aren’t what they used to be back in their heyday. The creativity just isn’t there anymore. As usual, Super Bowl 2010’s commercials were dominated by cars, beer, Doritos and plenty of women.

A few standouts included a Snickers commercial featuring a football-playing Betty White being tackled. She certainly displayed her wonderful
sense of humor and was definitely the funniest commercial this year. 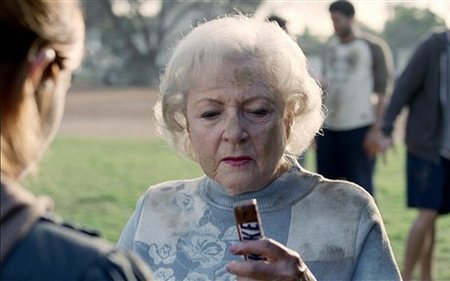 Coca-Cola had several good Super Bowl commercials including a Simpson’s ad with the previously wealthy Mr Burns losing all his
belongings and walking away dejectedly until Apu gives him a Coke.

Another successful Coke commercial involved a sleepwalking man in Africa, encountering elephants, tigers, hippos and hyenas on his journey to find a Coca-Cola.

The census commercials starring the comedy troupe from Best in Show were clever and entertaining.

Everyone in America should know by now that Denny’s will offer free Grand Slam breakfasts on Tuesday from 6 am to 2 pm and on your birthday throughout 2010. The ongoing Denny’s
commercials with upset chickens were funny and memorable.

The Tim Tebow commercial for Focus on the Family aired early on the game. In fact, it was the third commercial after the game commenced.

In case you missed the controversy, the debate involved Tim Tebow’s mom who spurned doctors’ advice to have an abortion and instead chose to have a baby, Tim, a Heisman trophy winner.
Since, the Tebow commercial never mentioned abortion outright, it just didn’t seem to spark much controversy in the end.

The multiple movie ads were eye-popping with plenty of action and graphics. Many were for spring and summer popcorn movies including Last Airbender, Alice in Wonderland, Robin
Hood, Prince of Persia and Shutter Island. Harry Potter fans were thrilled to see a Super Bowl commercial for the Wizarding World of Harry Potter at Universal
Studios in Orlando. Visually stunning, we can all look forward Quidditch, Hogwarts and roller coasters!

CBS promos were abundant especially for their Monday night comedies, How I Met Your Mother, Accidentally on Purpose, Two and a Half Men and The Big Bang Theory.
Why couldn’t they have shown an extended special of one of those shows after the Super Bowl instead of Undercover Boss?

Sadly, the Super Bowl commercials devoted plenty of airspace to degrading women. Godaddy.com featured Danica Patrick, who is so amazingly successful in the male-dominated Nascar. Why did she feel
the need to appear in these commercials?

Women are either treated as sex objects or incessant nags in most Super Bowl commercials. Great, thanks! Bud Light, Flo TV, and Bridgestone tires were the worst offenders this year.


The one exception was Mark Sanchez, quarterback for the New York Jets, urging women to learn more about heart attack symptoms unique to females. Go Jets!

Lastly, one of the standout commercials for Super Bowl 2010 was more touching than humorous. A calf and a colt befriend each other through the fence dividing their green pastures. Years later, the
grownup Clydesdale is pulling a Budweiser carriage down the road when the calf, now a bull, recognizes him. The bull breaks through the fence just to greet his friend once more. A sweet ending and
a welcome antidote to all that testosterone!

Read on for more Super Bowl

The Who rock The Super Bowl

Join the chat about this year’s Super Bowl