Carrie Underwood has certainly had a whirlwind year. The newly engaged entertainer can now add movie star to her illustrious resume! The country crooner just landed her very first movie role. Underwood will play a supporting actress role in an upcoming flick about surfer Bethany Hamilton. 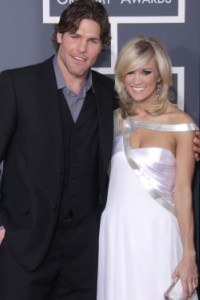 This is
not unusual for a singer to morph into the big screen as fellow entertainer Taylor Swift will make her debut with a role in
Valentine’s Day, a film literally starring every A-lister in Hollywood ranging from Julia Roberts to Bradley Cooper to Jennifer Garner.

Underwood’s film, Soul Surfer, is about the surfer who lost her arm to a shark when she was only 13-years-old. Carrie will play Bethany’s friend and church counselor, Sarah
Hill.

Bethany noted, “Sarah has been my best friend since I was very young…after my shark attack, she always knew what to say to push me on.”

AnnaSopha Robb will play Bethany and Dennis Quaid and Helen Hunt will portray her parents. Jack Nicholson’s daughter, Lorraine, will play another friend.

As if this isn’t big enough news, Carrie Underwood will sing the National Anthem at the Super Bowl in Miami on February 7. Right after the game she will jet to Hawaii to film the movie and in
March, audiences can catch Underwood on How I Met Your Mother in a guest spot.

Read on for more Carrie Underwood

Carrie Underwood appears on How I Met Your Mother