Charlie Sheen will be charged with felony menacing and misdemeanor assault in connection with the Christmas morning fight with his wife. 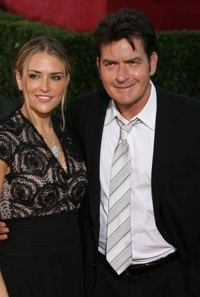 Law enforcement sources told TMZ that the criminal complaint will be filed in Aspen, Colorado late Friday or early Monday morning. Charlie is due to appear in court Monday for his arraignment.

At the same time the judge will hear arguments from lawyers for both Charlie and wife Brooke Mueller — who he is accused of attacking — to loosen the protective order currently preventing the couple from contacting each other. The couple wants it dropped so they can move back into their California home together and work on their marriage.

Brooke was just released from a North Carolina hospital/rehab facility, where her lawyer said she was admitted to fully recover from the pneumonia that landed her in the hospitalin January.

Charlie’s ex-wife Denise Richards recently gave a surprisingly boring interviewwith Oprah in which she talked about her own situation with Charlie without actually talking about it. One thing she did say was that she received a call from Charlie on Christmas Day from the Aspen jail.

“I thought it was odd that he was calling collect,” Richards told Oprah. “And he said: Yeah, they won’t let me use my cell phone here. I’m in jail. He told me that he and Brooke had gotten into a fightand she called the cops.”

Richards, for one, wishes the couple nothing but the best. “(Mueller) was going to be, and is, my daughter’s step mom. So I want that to be a healthy marriage,” she said. “That helps everyone.”