Grey’s Anatomy’s Derek has high hopes about the changes he can make as Seattle Grace’s new interim chief. There’s quite a bit of residual and new drama to contend with first on the February 9 episode of Grey’s Anatomy. 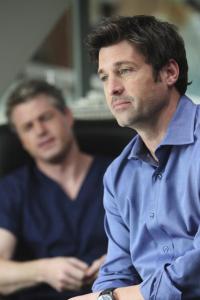 While Derek can’t
hide his pride over his new title, he’s also intent on getting his predecessor, Doc Webber (Jim Pickens), to go to rehab. No surprise, the former chief is too angry to hear it, but Derek insists he
wasn’t out to ruin his mentor’s career when he turned him in for boozing and refuses to leave Webber alone.

Meredith (Ellen Pompeo) also weighs in on Webbers decision to throw in the towel now that he’s
been benched, even as she prepares for her first solo post op surgery. She’s sure she’s ready for the challenge, but things take a turn when the patient awakens from anesthesia mid-surgery!

Derek may be facing a lawsuit on his first day at the top on Grey’s Anatomy and then, there’s all that romantic tension. Overwhelmed
by the pressures of being part of a love triangle, Teddy (Kim Raver) tries to take a break from Cristina (Sandra Oh) by putting another intern on her service. Cristina isn’t likely to take that well!

With Mark refusing to even look at her, Lexie (Chyler Leigh) turns to his best pal Callie (Sara Ramirez) for advice on how to handle the
breakup. Her frustration turns to fury when she learns her ex-beau cheated with Addison more than once. Meanwhile, much to Mark’s chagrin, Callie seems to be taking Lexie’s side lately on
Grey’s Anatomy.

Then in California, on Private Practice, Addison and Cooper counsel a couple that’s faced with a horrifying choice when they learn
they can only save one of their ailing daughters; Sam is floored to learn Dink intends to marry Maya; and with Naomi still in shock over their daughter’s pregnancy and her own response to it, the
gang stages an intervention.

The double block of drama starts at 9 pm on ABC.

The cast of Grey’s Anatomy dish

Test your Grey’s Anatomy knowledge in our quiz