Taylor Swift’s Grammy night was one to remember. Swift took home four Grammys including the coveted album of the year for Fearless. Despite the accolades and achievements, Swift is receiving less-than-stellar reviews about her Grammy night performance. 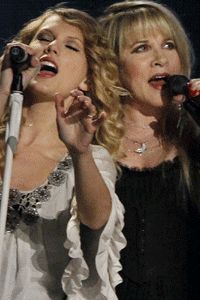 The head of Swift’s record label, Big Machine Records is firing back.

CEO Scott Borchetta proclaimed, “She is the voice of this generation. She speaks directly to (her fans), and they speak directly back to her. This is not American Idol. This is not a competition of getting up and seeing who can sing the highest note. This is about a true artist and writer and communicator. It’s not about that technically perfect performance.”

One of the first backlashes appeared in The Tennessean and when he started to defend his superstar talent he mentioned the criticism was “just over the top.” Borchetta added, “”It’s that classic thing that critics do of building something up and then wanting to tear it down.”

Swift had previously rehearsed her performance and duet with legendary Stevie Nicks twice at the Staples Center in Los Angeles. Both rehearsals were in front of a live audience to the point where media on hand said their voices complemented each other and their harmonies were nice.

February 1 was a slightly different story and Borchetta indicated there was a technical snafu. There was a volume problem in one ear. Swift was concerned that she wasn’t able to hear everything in the mix.

“That’s just part of live TV…so you’re going to have difficulties on occasion. Unfortunately, on one of the biggest stages, we did have a technical issue. She couldn’t hear herself like she had in rehearsal.”

And despite her whirlwind incredible year, bloggers and the media in general were not impressed by her performance indicating it was off key. Regardless of the night, considering Swift’s close connection with her fans, it’s doubtful they’ll shun their fave superstar. Borchetta quipped, “If you haven’t seen her live performance, you’re welcome to come out as my guest to a Taylor Swift show and experience the whole thing, because it’s amazing. There’s a reason tickets are selling like they are.”