Olympic figure skater Johnny Weir is engaged in a battle royale with anti-fur activists on the eve of the 2010 Winter Olympics. 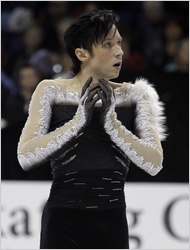 The flamboyant athlete received a lot of flack from animal rights groups after competing in the US Figure Skating Championships in a sparkly black bodysuit with white fox fur on the shoulders.

PETA and Friends of Animals both contacted Weir and his costume designer Stephanie Handler asking to modify the outfit.

Weir’s original response was one you’d expect from the fashion-forward performer:

“I totally get the dirtiness of the fur industry and how terrible it is to animals. But it’s not something that’s the No. 1 priority in my life. There are humans dying everyday. There are thousands if not millions of homeless people in New York City. Look at what just happened in Haiti. I tend to focus my energy, if there is a cause, on humans. While that may be callous and bad of me, it’s my choice. Every skater is wearing skates made out of cow. Maybe I’m wearing a cute little fox while everyone else is wearing cow, but we’re all still wearing animals.”

Apparently Johnny didn’t get the memo that animal rights groups have more bite than Johnny has bark. After the groups threatened to protest at his Olympic competition, Weir backed down — reluctantly.

“I would like to announce that due to pressures and threats from a certain animal rights group, I will be changing the genuine fox fur on my free program costume that I will use in the 2010 Winter Olympic Games in Vancouver, BC, to white faux fur. I made this decision after several threats were sent to me about disrupting my performance in the Olympic Games and my costume designer, Stephanie Handler, was repeatedly sent messages of hate and disgust. I do not want something as silly as my costume disrupting my second Olympic experience and my chance at a medal, a dream I have had since I was a kid. I hope these activists can understand that my decision to change my costume is in no way a victory for them, but a draw. I am not changing in order to appease them, but to protect my integrity and the integrity of the Olympic Games as well as my fellow competitors.

Just weeks away from hitting my starting position on the ice in Vancouver, I have technique and training to worry about and that trumps any costume and any threat I may receive.”

Friends of Animals says no one from their group threatened Weir or his designer.

“If he’s made the smart decision I hoped he’d make, to shun the skins of animals and not decorate his costumes with them, that’s a very good thing and I’m happy to hear it,” said Priscilla Feral, the group’s president.

read on for more Olympic coverage: